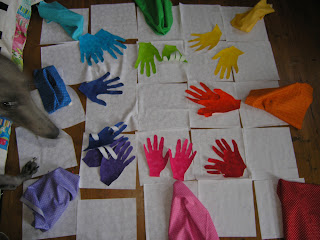 Squeak is interested to know what the Helping Hands project was all about. I woke up with an idea, knowing what people, what colours and even more wonderful, what fabrics from stash. So once I had all the hands I had asked for I got to work. 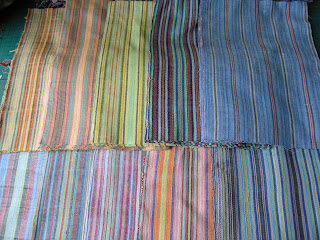 I cut some scarves I bought in Aswan, Egypt before my friend’s purse was stolen. The owners of the shop were the ones who organised the hunt for the woman who was begging up close to us and were very reassuring. Their shop smelled of incense, so maybe a little of that lasted. 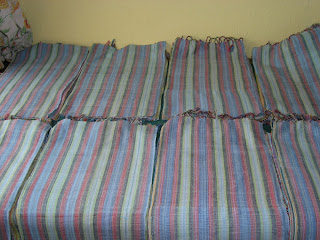 All 8 of us would have a part of each including the tassles to do whatever we want with. Just a little thank you to my Helping Hands friends who gave me their hand outlines without knowing what on earth I was going to do with them. 🙂 Thank you so much ladies. 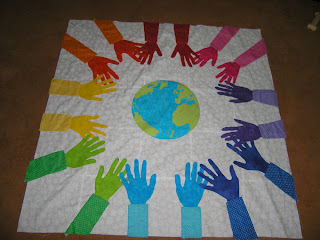 I heat and bonded everyone’s hands and made up sleeves so it would look like we were all sat around a table holding hands protecting the world.

So let me introduce you to everyone:

Yellow Deb of Angel and the Pukeko based in New Zealand
Green Stephanie of Loft Creations based in Ohio, America
Turquoise Simone of Quilting and Stitching Diary, based in The Netherlands
Blue Ulla of Kotkarankki, based in Finland
Purple Melanie, of Houseelf-Doings based in the UK

Pink Tracy of Prana Light, based in Norway 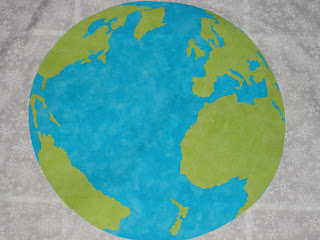 With jiggery pokery on Google images I managed to make planet Earth. 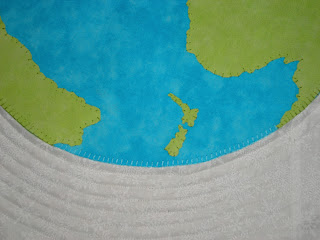 To fit New Zealand in I had to put it just off the coast of Africa. I don’t think anyone will mind being away from a quake zone.

There was a lot of hand sewing. Blanket stitch for the hands, needle turning for the sleeves, and stab and blanket stitch on Earth. 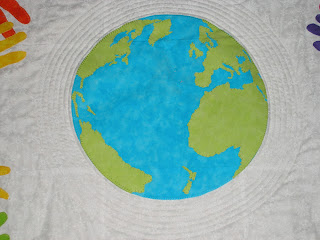 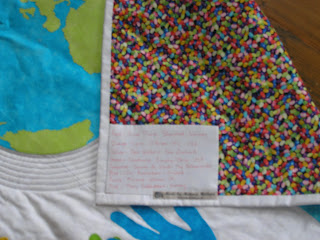 Backed and labeled explaining who everyone is, what colour they are, and what country they are from. 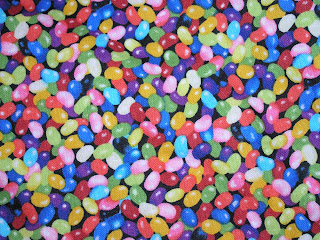 Some jellybean fabric for the backing. 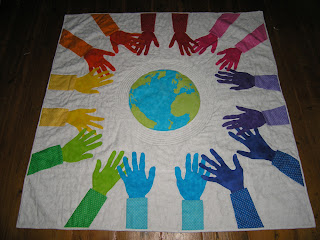 So there you have it all finished. A symbol of friendship from all over the  world only possible through Blogland. 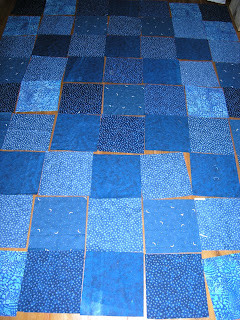 Finally I have cut the pieced back for Amsterdam Leaves- lots of stars, some moons some plain and a batik. Time to thread the machine in blue cotton again.

I went to my first tutorial 12:30-3:30pm on Saturday. I won’t name tutors or the university, but it was absolutely awful. I arrived at the destination at 12:10 and couldn’t find the way into the building  it was raining hard and blowing a fair bit. I walked clockwise round the huge building trying to find an unlocked door for 20 minutes. When I finally found one, an automatic one, there was no one to tell me where to go in this vast building. No doors were labeled with the class being taught. I phoned the uni who were renting the room in this uni for the tutorial. They had no idea which room had been allocated. I called Lovely Husband to come and pick me up. It was he who found someone sweeping in a T shirt from this uni campus who showed me where the room was at 12:50.

I walked to the back of the room as the seats were laid out in rows. I had nearly got my coat off when the tutor at the front snapped at me “You’re late!” I looked him in the face to see if there was a hint of humour there. There was nothing just animosity. I was cold wet and tired by this point having been frantic for the last 40 minutes trying to find the class. I had had enough. How could I expect this man to mark any of my work if he felt this way about me? I hadn’t had time to sit down, so I just got my bags and said “See you February maybe,” (the date of the next tutorial) and walked out before I could burst into tears.

He came out of the room following me. I explained what I had gone through because no one had put signs up or given instructions about which room within the vast building, or even stuck a note on a door with blue-tack. I couldn’t get out of there fast enough. Another student came out into the car park who said that he had been nice until then. I think she was shocked at his behaviour too. I’ve since found out that another student arrived 20 minutes after I left. I hope he was nicer to her than he was to me.

I phoned my uni as soon as I got in. They had a record of my previous call to them. I explained what had happened when I had finally arrived in at the room, and I requested another tutor. By this point I was a blubbing mess! I am glad to say that a new one has been appointed. She sounds lovely so far. On her tutorial site there is a whole post about how to find the right place in the building to get in (pre-dating my transfering to her) and how to find the right room once you get inside. She points out that it is a hard place to get to. I think there have been problems for students before and she has done her best to help.

I did hear back from the rude tutor in reply to an email I had sent 5 days earlier, (such a prompt response- not!)  as well as answering my query, he pointed out that it was a pity that I had felt unable to stay for the tutorial. There was not one word of apology for his own conduct. It just shows that you can become a Dr and still not have learned any manners. I am so glad to be out of his tutor group. So my new first tutorial is this coming Saturday. I know it can’t be any worse than the previous one.

Thank heavens for sewing and you dear friends to keep me sane! So do share what horrible things have been happening with you. We’ll have a chat and a cuppa and put the world to rights.