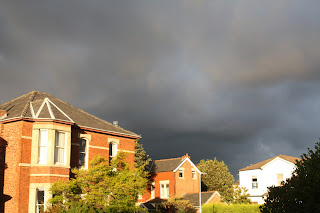 This is a bit of a bitty catch up post as life has been a bit busy. We’ve been having skies like this. 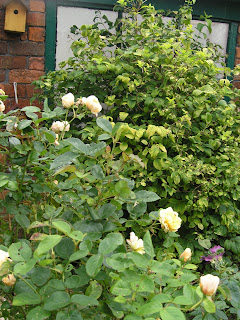 But the garden is still showing some signs of Summer. 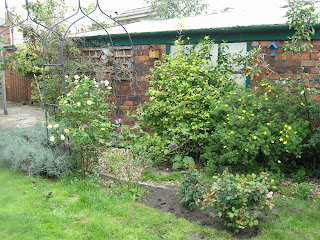 We bought a rose to commemorate Daughter passing her exams. The rose we chose was “Mary Rose” by David Austin available in the states too. It was apt as the Mary Rose ship will be on display in Portsmouth next year where she will be at uni. As there was a special offer on we also bought “Brother Cadfael” pictured below top left. The smell from the 2 roses is superb. We dug a little of the lawn away to put the 2 bushes in (above pic) and even found a supply of horse manure to help them. 🙂 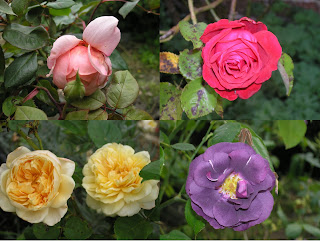 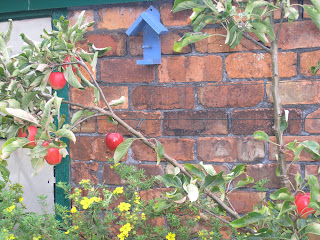 The eating apples are ready to come in. 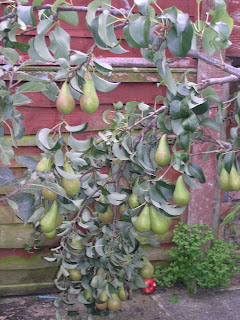 I’ve taken 14lbs of pears off this little tree but still it’s branches are bowed down. 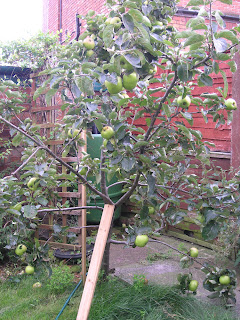 The cooking apple tree is having to be propped up inspite of having a couple of bags of apples removed. 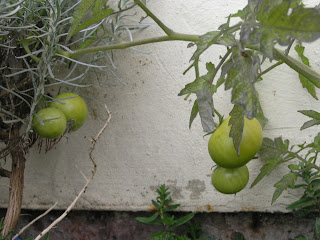 Tomatoes are still coming. These may end up being ripened on the window sill as the rain is bouncing off the pavement at the moment. 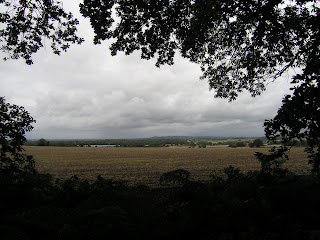 We had a walk in Ruff Wood near Ormskirk. 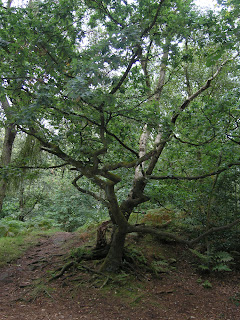 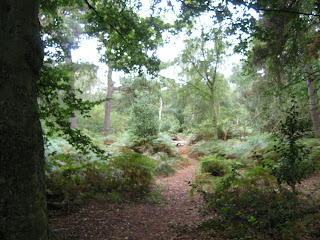 The colours are changing for Autumn. 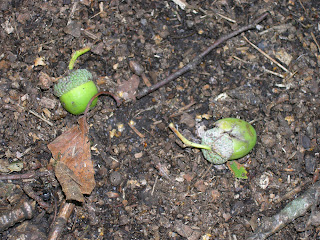 And acorns were on the ground. Love the cute shape! Maybe the fairies need them to drink from really? 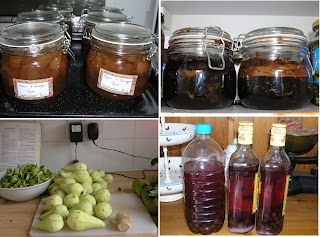 There has been a lot of action in the kitchen. Pear and Ginger jam, plum jam, elderberry wine (not shown) and sloe gin. 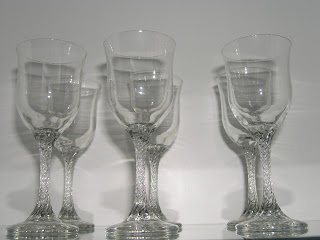 I had to make some sloe gin especially for this Christmas now I have some Victorian sherry glasses to put it in. 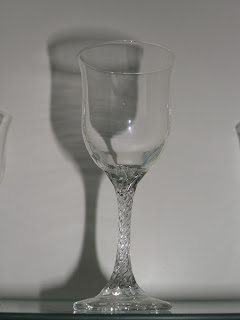 They were one of the bargains from a charity shop in Lytham St Annes (shared last time). I love their elegant shape. 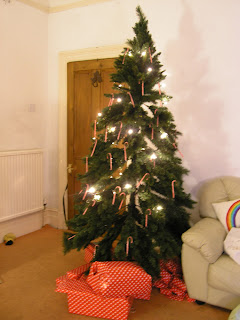 Yesterday was Son’s birthday. He wanted a Christmas themed day so we were sneaky and hid the plastic tree and put it up decorated in white lights and candy canes. He was so surprised to see it with his birthday presents underneath. As the theme was Christmas, I had to buy the typical hankies, socks and smellies which all males get every year. He laughed at those. 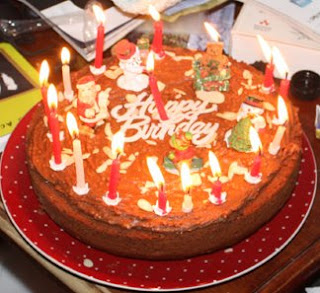 The chocolate birthday cake was decorated in Snowmen and Santa. We bought him a little engraved cufflink box and J cufflinks. 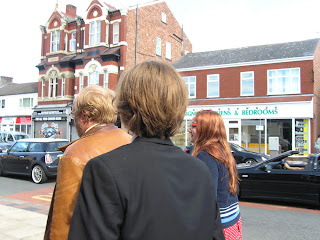 We dressed up and had a meal out to celebrate. Becoming 16 is a big birthday. 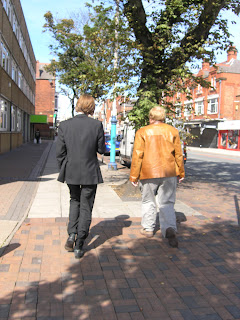 I thought he looked so smart in his suit. It is official now- he is taller than his father. 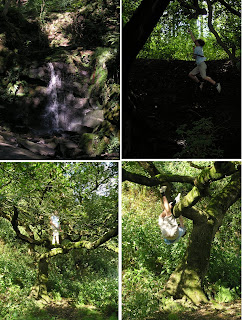 He chose to go to the Fairy Glen near Parbold. Maps in link. He spent a lot of time swinging from trees. What a wonderful way to spend your birthday! 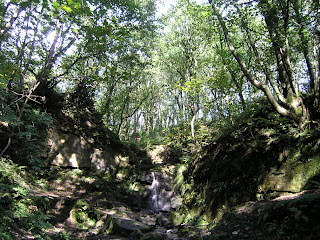 The sun shone but it was wet underfoot from the rain lately. 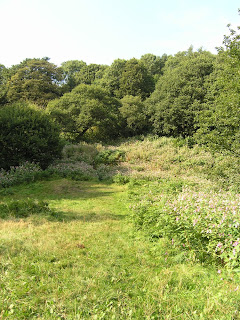 Some of us rested in the sunny clearing just above the valley with the stream runnning through. 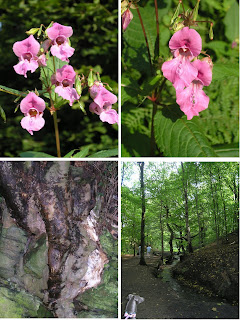 Himalayan Balsalm  had really taken over the area. Pretty but alien and very invasive. 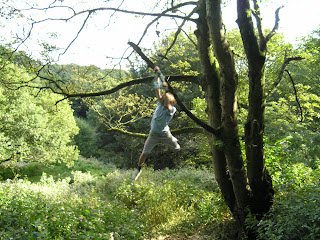 You wouldn’t believe the steep slippery drop Son is swinging above! 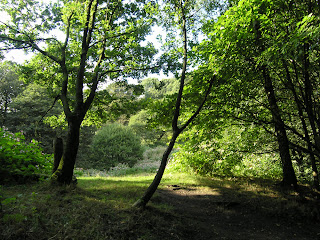 He had a lovely day- the sort to make memories. And he did save me somehow from slipping down -I foolishly was only wearing sandals! (Yep next stop to climb Mt Snowden in flipflops.) LOL Yes very silly of me.I thought I was a gonner. 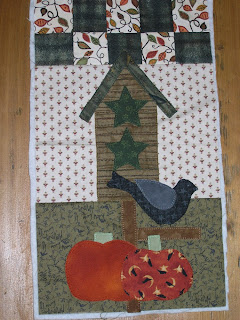 I have been working on Autumn House. 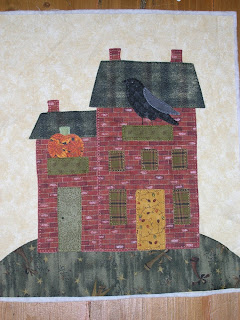 And am now working on the last block. 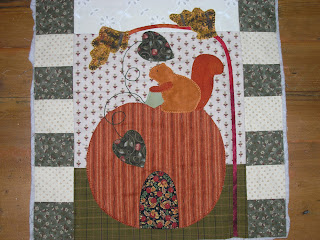 One of the fabrics I bought in Lytham is now a new pencil case for Son. He loves owls. 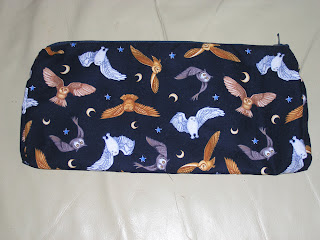 I have also used some elements of Rosalie Quinlan’s Fairy Garden Canvas as appliques for a bag for Daughter. It isn’t sewn yet so I have to get my needle working faster. 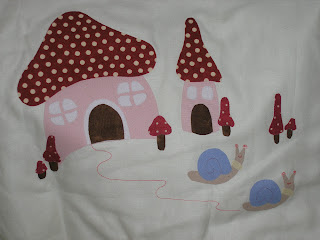 Sorry about a hodge podge post but that is life at the moment. If I’m not in the kitchen thinking of 1001 things to do with apples and pears, I’m trying to get the house into a reasonable state, volunteering for GRWE, and sewing to stay sane. Anyway Son is back at school and Daughter has a huge heap of things for uni, so all is sort of organised.

Off for a coffee and feed the washing machine again. What are you doing?


Posted in Uncategorized by House Elf with 12 comments.