The front garden hasn’t defrosted in days where it is North facing.

So there has been a lot of sudden companionship developing in hounds anxious to be (on top of) as near the fire as possible.

You can see Precious of the Toupee’s patchwork ear in this snuggly pic. If you put a duvet down, we think there is a special greyhound sonar that detects it from elsewhere in the house and suddenly as you are about to lay on it yourself, they have appeared and there’s no room. 🙂 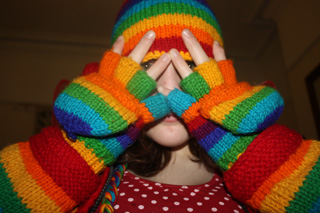 I wore some Christmas gifts. This cobweb-light wool shawl (doubled in pic) was so warm and beautiful. It came from Russia. The necklace came from China. It almost felt like a United Nations meeting around the table for Christmas Dinner. 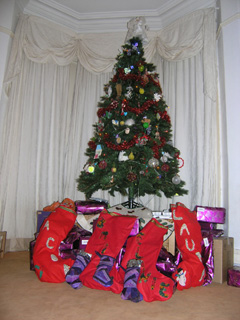 Then I broke with tradition and had a glass of grape soda. I had saved it from when daughter brought it back from North Carolina USA. She said a man at customs was going to stop her bringing this and a big grape soda on the airplane but she begged (there was a lot of emphasis on the begged when she was telling us the indignities she had had to endure) and pleaded saying that it was on her mother’s list of things she wasn’t allowed home without. Hmmm maybe I did over-emphasize just how much I missed the stuff. LOL Lovely e numbers! So cheers and thank you for letting her bring it who ever you were. It was appreciated.

Much later (like when we could get up to walk- Christmas Dinner is traditionally a huge meal) we had a supper of hot mince pies and cream.

We’ve eaten the Buckeyes from Ohio now. They were delicious, thank you Stephanie.

I also fed guests on game pie- recipe given on a previous post with the medlar jelly I spoke about earlier. I can confirm that the combination of tastes is perfect together. You can also have it on toast like a normal jam. Useful stuff!

So as I look through the front door at the last night of 2008 I wonder what 2009 will bring. We get an extra second of 2008 as the world is slowing down- Can I blame the recession? LOL

There will be the planned things I have lined up like the “Black and White Quilt Challenge” and the numerous small projects I put off starting to get the Christmas things done. I think though what will make 2009 exciting, will be all the new things I will see and share and what I will see on your blogs. It’s the unexpected which makes life interesting. Who knows we could all, like Mary Poppins jump through a chalk painting and find ourselves having adventures. What painting would you choose? I’d like one with a Summer’s day, a meandering river, a picnic and a spot of crafting. One like the 9th pic on this page I think this artist is very good her work is so like the Molly Brett books I still love. Close up of the pic itself.

I hope you are all having fun saying goodbye to 2008, finishing UFOs and looking forward to the adventures of 2009. I think we’ll have a lot of fun.