Bargain of the week: Kath Kidson bag made from 100% recycled plastic bottles now selling at Tesco supermarkets for £3.50. That is a lot better than her bags in the shop in York!

This is the old police station built 1882 in Leyland. Sorry about the sun it refused to shift over for a sec.

I love the way they put detail into the buildings back then. New modern buildings just don’t seem to have that level of craftmanship. The one’s I’ve seen lately are more like boxes.

Here we are in the Home Brew shop. Would you believe all these essence bottles are for adding to spirits to make your favourite liquers! I didn’t know you could get half these flavourings!

That little corner made from the L shape of these Victorian workers’ houses was all the garden that family had. No wonder so many people mourned the old agricultural way of life where children could play in the fields and get strong in the sun.

I have no idea of what PTW stands for so as it’s in a car park and we’re near October what about “Park the Witch”? All suggestions welcome.

Poplar trees reminded me of the butressing on a Gothic church striving upward.

This little corner on the way back shows the old iron stock fencing for cattle and behind it the modern post and wire sort.

A565 road by Tarleton. This church is at the top of a little hill.

Opposite it this Victorian pig shed. Some of the big enclosure stones have gone but you get the idea. In Victorian and older times a lot of cottage families bought a suckler pig in Spring and raised it on scraps all Summer to slaughter in the Autumn/Winter for food. A couple I knew got a call out over a some pigs they had sold to another couple. The pigs were down and making odd noises. As experienced people they rushed over only to find the pigs dead drunk in an orchard with fermenting apples on the ground. 🙂 They recovered fine. I like Gloucestershire Old Spot pigs. There was one on my school’s farm who was such a friendly lass. Between her and the goats thievery I didn’t get much lunch. LOL

Back home in Oxfordshire the walls would’ve been brick or limestone rather than these slabs. If you click here there are virtual tours round Coggs Manor Farm in Witney both inside and in the yard. The Victorian kitchen is gorgeous. A lady was demonstrating Victorian cooking when I went there last and the smell was wonderful. If you are in the area it’s well worth a visit.

The landscape up here in West Lancashire is very flat.

Hubby has started making beer from the things he bought, 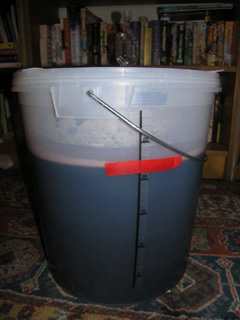 and wine. It’s gone from sounding like a flatulent dog to a coffee perculator in the corner of the study just over the weekend. The smells are sort of musky fruity!

I found some dried sloes in the shop which aren’t suitable for sloe gin but are ok for wine, so I got my Grandmother’s old jam pan out and started making a mash of them. We’ve not done anything like this in over a decade. I think it’s good that hubby has a non teckie hobby. 🙂

I did a spot of baking too- steak pie with potato pastry crust. It’s the only pastry I can make which is edible. It’s a cross between a dumpling and pastry in consistancy. It’s meant to be flatter than the pic like a real pastry. I like making my own steak pie because shop ones have a lot of “gloop” in them designed to make you feel full but don’t have any nutrition. Plus I get to see the quality of the meat I’m using which has got to be good.

1. Mix flour and salt, rub in lard
2. Mash in potato with a fork
3. Knead and roll out on floured surface to a bit bigger than your dish.

This is one of the illustrations from a 1920s gardening manual called “The Book of Garden Improvements” by Walter Brett F.R.H.S. It inspired the retro looking laminating below:

2 of the 12 rose pics went on the top of the new china cabinet after I found that some rotter had put a cup on it! I looked like this jumping up and down. The laminates should protect the top from any white rings. 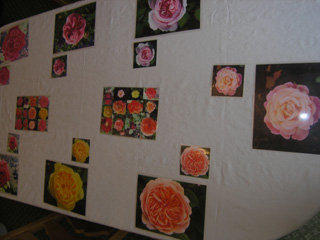 I did a set of cup and place mats so that in the dark days of bleak Winter when it’s dark and drizzley I can have a taste of Summer. I’m sure it will cheer me up no end with Summertime playing in the background. Yes must have a “Summer Day Re-make” when Winter has gone a bit too far with the gloom. 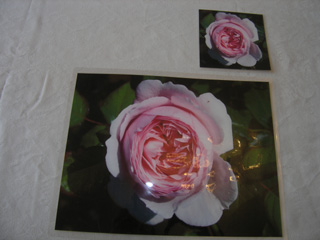 But I’ve not just been playing with my new toy- I picked up a needle too to make these gull-eyed views for the beach wallhanging for an Irish friend.

The North Coast of Ireland cliffs

The rocks near the rope bridge

So I’ve not been totally idle, but I want to get the sashings on this now- blue clouds. Thanks for your help. Gulls should be on it too.

So that is Friday and my weekend so far. Must get dressed and on with the rest of it. Hope you are having a lovely time. I’ll pop in to see.


Posted in Uncategorized by House Elf with 12 comments.