Hia- thanks for popping in. I’ve not been up to much in the last few days- laundry from a mucky and wet adventure weekend for daughter and our guest, a little jaunt into town and yesterday at the beach with son. Early Thurday morning our exchange guest leaves with our daughter for 10 days in North Carolina. I’m now going to whine and ask for advice so feel free to ignore the next few paragraphs and skip to the picture- it’s gorgeous.

I so wish our guest had seen more of England, but there is a strict time table which when it comes down to it, is able to be changed many times by the organisers. I’m frustrated by it. Am I a control freak? She was told that all meals were included as “group meals” but when it came down to it, all the youngsters have had to pay for all their meals outside of their host’s home. It doesn’t seem fair on them. What about if they were on a tight budget?

We offered to take our 2 plus another US/UK pair to Haworth Parsonage in Yorkshire home of the Brontes or up to Beatrix Potter’s House, but our guest prefered to stick with the “organised” schedule in the larger group. We had to try. I didn’t want her to go home disappointed that she had spent her last 3 days solely in Liverpool mainly shopping as some events fell through. I have never been a host like this before. In Oxford the host is more hands on and involved. Is this unusual? Please share your experiences of hosting. 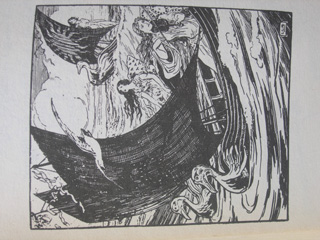 Pic from a beautifully illustrated book of nursery rhymes I picked up for 10p. “I saw 3 ships come sailing” by LL Brooke 1916. The bird was a tad familiar as you will see from the photos below.

This Christmas Quilt from stash bits waiting for hand sewing of applique bits before being sewn together.

These shapes backed in felt will go on the border.

Apologies for the next few photos taken by hubby on his mobile phone. Totally due to me being a nupty and not taking the camera with us.

In the background is the Victorian marine bridge. In the foreground is part of the pier. As the width of the beach increases, the originally sea fed marine lake has become stranded inland within people’s life time.

This is the new hotel being built by the Marine Bridge on what was the Floral Hall Gardens.

Ainsdale Beach at sunset. We took the dogs for a run here while the tide was coming in. The beach has a very shallow slope so there is a risk of people getting stranded on sand banks not realising they are cut off from the shore. There are usually rangers patroling the area.

Just before the sun set it glowed a gorgeous pink.

Son and I came back to the beach on our own yesterday (with camera) as the sun was shining. The weather said heavy showers?! Here’s a wonderful snake kite. It made beautiful patterns in the sky.

This lot kept me entertained:

I was laying on the sand to take these shots so you can imagine how close they got. I don’t have a zoom lens. These are just a few I took. I was learning how to be quick so there are many part wings. The shapes of the wings were amazing in flight.

The 2 herring gulls in the above picture reminded me of the hecklers from the Muppet Show- the way they were looking at the smaller hooded gull. Hope the show clip made you smile.

C.S. Lewis’s house in Oxford is getting a blue plaque! I’m so glad the place which inspired Narnia is getting the recognition it deserves. You can see the lake on Maps.google.to the South of Lewis Close. The midges were biting when we went so avoid the area near dusk. We went to see Prince Caspian at the cinema with son at the weekend. With so much attention being on the girls we thought he deserved some quality time. It’s a well made film but boy was Caspian older than in the book.

Annie- forgot to tell you the migrane relief mint stick is called “4head“. It really helped my daughter.

Someone asked a while back if I made things to sell. I don’t as yet- perhaps I might in the future when I have learned how to do things properly and be less amateur. I’m still at the stage where I mainly make things from patterns, so I wouldn’t want to breach copyright. If there is something you like that I’ve made, please contact me and I’ll see what I can do whether it’s tell you where I got the pattern from, or if it’s my own idea whether I could make another for you.

I’ve still got 4 stitcheries to sew for the BOW quilt. I did take one to the beach yesterday (82.4F 28C) full of good intentions but it was more fun to play in the sand. We found a live fan shaped shell in pink and put it in a bucket of water. We watched it come out- a smooth white blob sort of critter. Fascinating. Then later we caught a sand worm who tried to burrow down so we put more send in the bucket of water. It was only while we were watching these that we realised we had caught some tiny pale brown dotty shrimp. There were so many “new” things for both of us.

Then last night was thundery storms and we are back to overcast weather and 73.4F 23C. I’ve been up since 5am with 2 wuss dogs pacing and panting about the thunder and lightening so I’m going to be a right grouch later. Come on ladies please tell me wonderful happy things.

Thanks to Melissa– I looked at this blog and was horrified. I think I’ve sent some of you this by email. I couldn’t believe that child slavery was being used to produce chocolate! It just isn’t widely known in the UK even though there are videos on You Tube. I know the Ivory Coast has a tradition of having slaves historically but surely in the C21st….. Words fail me.

My coffee saying of the day- coffee drinkers are better thinkers. More coffee sayings appreciated. I know this is meant to be a craft blog- normal crafting will resume later this week- promise. I really NEED to have some quality time with my sewing machine. I’ve got an idea for a Rainbow Crow applique from the book I plugged before, but I’ve not had a chance to make it.

I hope to pop in on you soon. Have a wonderful inspired week!


Posted in Uncategorized by House Elf with 21 comments.