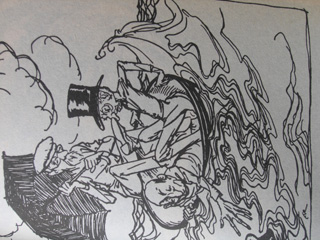 “Three Wise Men of Gotham” by A Rackham to illustrate the nursery rhyme of that name.

It’s been a bit rainy here- lovely shapes in the clouds. However August is meant to be the hottest month in the UK not the floods I’ve read about happening on the east coast. Where is this year’s Summer?

This beautifully shaped piece of barnacled wood is what son dragged back from the beach. It’s incredibly heavy.

The sun rise. Daughter and I woke at 4am and chatted. She told me the tales of what had happened during the exchange programme’s activity weekend away together. Being only 15 she was on the sidelines with her own age friends and was watching the goings on of the older ones like a soap opera!

One group of under 18 year old girls was in the boys room drinking after bed time. Other girls went to get them, then they all came back bar one. That girl eventually came in but with a boy. When there was a dorm check the boy dived out of the open window on to the roof of a single storey building. After the girl joined him on the roof but they were spotted and a chase with spotlights began. Eventually they doubled back still rolling drunk. Daughter told her to change her clothes quickly as she would be recognised by them. She pretended to be asleep in her bed and he dived underneath when staff came in waving torches in everyone’s faces and making sure people were in beds. They said a boy was missing, checked beds and woke everyone and then were quiet for a bit. The boy under the bed thought they were gone, so scrabbled out from among the girl’s cases and clothes and promptly said “Shit!” when he realised he’d been caught. He was marched off and put into solitary away from the others. The girls kept trying to ring the boy’s dorm but being in Wales, the signals couldn’t get through the mountains.

The next morning they found out that the boy was allowed to stay but each night there was hourly patrols of the dorms from then on and the following night. daughter got fed up with being woken up so much with a torch in her face. In this half asleep zombie condition she was in the canteen when this lad started shooting his mouth off saying that this particular girl was easy and that she did all the running and that the other lads could try if they wanted! Daughter thinks they hadn’t noticed her sat there. She knew the girl had a real crush for the boy and would be so upset, but she ought to know. At this point I started humming that song from “”Greece” -Summer Loving so daughter and I got the giggles. Anyway they found our guest who was her best friend and said that yes the girl ought to know asap.

The girl later thanked daughter, and the lad in question (total English cad IMHO) was a little dumbfounded when the girl was dancing with Spanish lads that evening ignoring him. Now he’s flown out at his own expense with the rest of them and still hasn’t a clue that she knows. I just hope that a few of the girls dunk him good a proper in the river at New Bern as he deserves it!

The moral of this tale is avoid 17 year old English boys. 🙂

This is what I was up to yesterday at Patched Pumpkin. A combination of applique and embroidery to make a Pumpkin Wallhanging. I think I’ll edge it in the green and then back it. Click to enlarge pics.

I got this book from Amazon market place very cheaply and thoroughly recommend it. There are 20 projects -cushions, mats quilts. So many ideas that you could do your own thing with.

Block of the Week was on Thursday- now 3 blocks are sewn together. This shows the full width of the quilt. I can hardly believe that all these patches bar the embroideries came from one layer cake “At Water’s Edge”. I’m going to back it in cream fleece and take it to the Lake District for a pic. when it’s done. I think the colours will look beautiful there.

The next 2 embroideries for BOW are finally finished. I was given 2 more on Thursday so I still have 4 more to stitch. 🙁

I must do more on the Christmas quilt too (pic in last post)- hand sewing and sewing the 10 centre patches together.

Now daughter has arrived in New Bern NC these are a few things which struck her- “it’s very hot”, “it’s so weird watching young teenagers drive”,” the water was so hot at the outdoor pool party” “the river was even hotter than the pool” “the tree frogs are so loud as well as the crickets” “the rain is hot here”. LOL I think she is obsessed with the wet stuff.

Now why hasn’t she emailed to tell me what fabric she has bought? From what I can gather she’s bought some “rainbows” which I think are flip-flops in English speak. I don’t know send her half way around the world….. LOL She is really enjoying herself which is the main thing. I’ve been assured that it is very well organised so I’m relieved.

Finally to make up for telling you about that cad, how about this for romantic oblivion. What a sweet idea!

A friend from Belfast sent me these links as C.S. Lewis was born there.
A beautiful sculpture:
http://commons.wikimedia.org/wiki/Image:Statue_of_C.S._Lewis,_Belfast.jpg
A Lewis tour- fascinating:
http://dnausers.d-n-a.net/cslewis/oldtrail/brochure.html

No more news from here. I’ll have to pop over now and see what you’ve all been doing. Hope you are all having a wonderful weekend.