The outside of the basket from the other day. 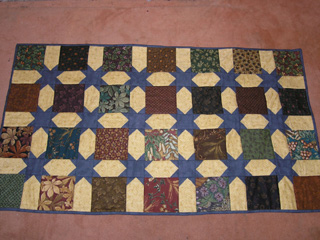 12 pentagons sewn by hand into a ball for 5 month old Bailey for Christmas. Mainly Kaffe Fassett fabrics. I love the colours together. He and Laurel Burch have got to be my favourite fabric desiners.

A cupcake pincushion or decoration. It came up larger than a muffin! May need to try to make it again but smaller.

I can’t post (yet again) my main project of yesterday as it is a present- hubby this time. I think he’ll love it, -promise to take a photo at Christmas.

The flooding of East Anglia didn’t happen in the end- it was a close run thing, literally a hand width from the tidal wave breeching the flood defences. There’s now a lot of talk about more money being thrown into defending towns from flooding as with global warming it’s likely this was not a once off incident.

Daughter would you believe is camping in the garden with a friend in theory doing their own food on a camp stove. They were on the computer yesterday evening, so it’s not quite the big outdoor experience they said they were ready for. I’m sure they used the kettle too instead of putting water on to boil as it saves so much time. Ah well I think they’re mad wanting to camp in 9 degrees celsius 48F with rain threatening and a fair wind. I’d go as far as marshmallows on the end of an old knitting needle in front of the fire but that is IT!

Off to do Christmas crafts with son.


Posted in Uncategorized by House Elf with 3 comments.