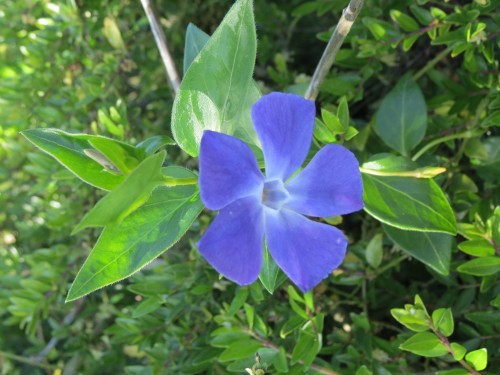 Sorry there is a lot of tilting head left in this post. For some reason wordpress refuses to think that a photo can be taken portrait style! Periwinkle /vinca major. 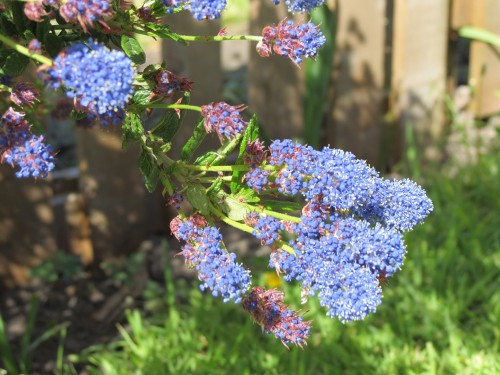 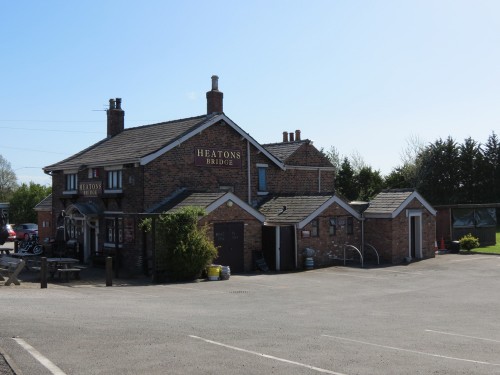 Both are in the Heaton’s Bridge Inn garden. 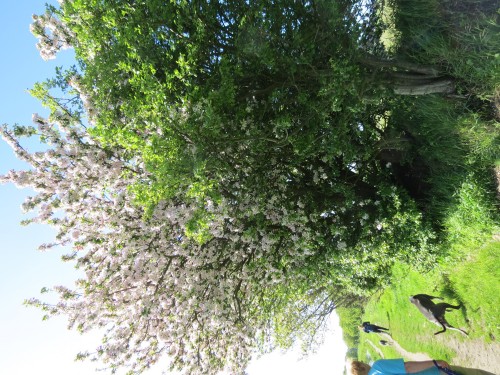 It is on the canal bank to we walk there on good days and rest so Bungle can manage the walk. 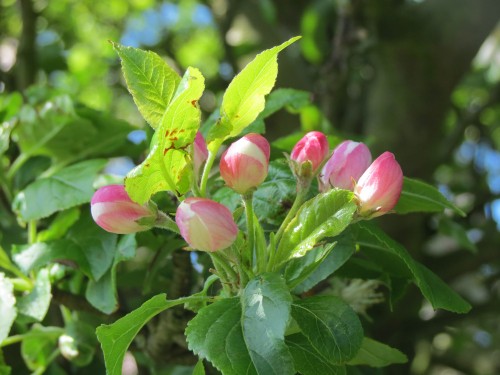 I like to think that a Victorian farm hand or one of the navvies who dug the canal, flung an apple core into the hedgerow where it became this tree. 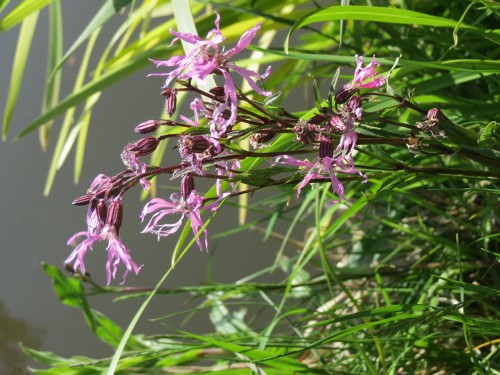 The canal is so beautiful. You wouldn’t think that when it was built to take goods between Leeds and Liverpool, that it was a busy noisy place with coal barges. 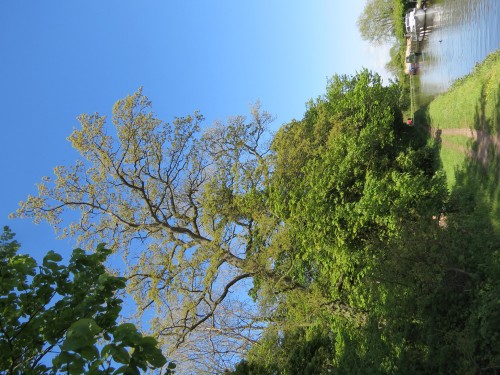 Now it is a haven for wildlife. 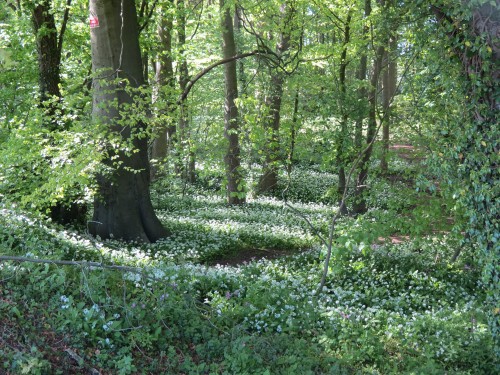 I think the red squirrels are making a come back in the area after so many were wiped out by the pox carried by the grey squirrels. I saw one in our garlic woods for the first time. I plotted it on a UK map. It is the furthest inland from Formby so far. 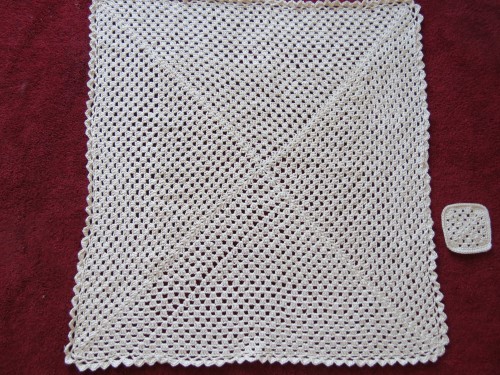 An all cotton baby blanket and cup mat in crochet 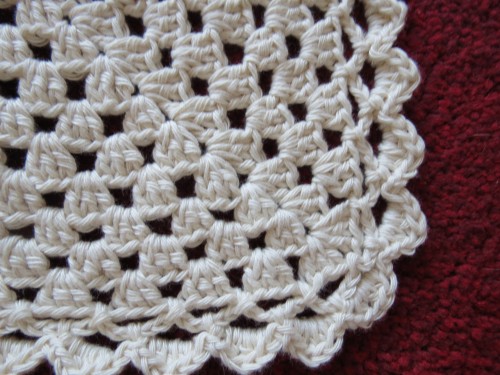 with a wavy trim. 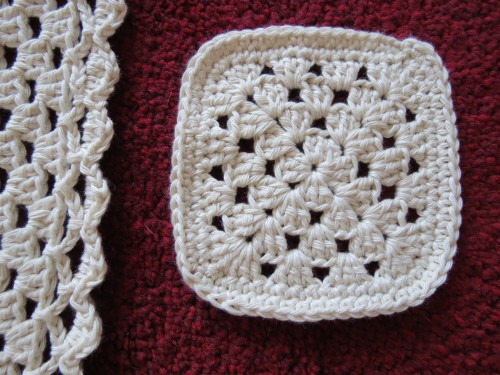 Close up of cup mat. 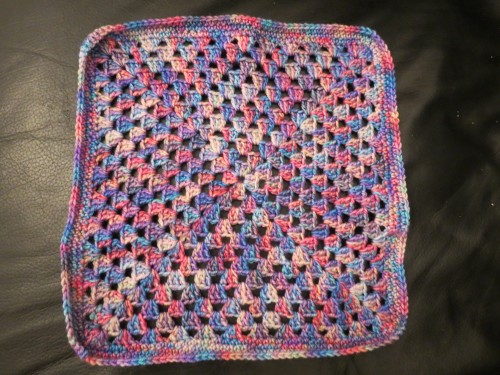 Left over lace weight yarn made a tea pot sized mat. I needed little projects like this just so I felt I was doing something with my hands while I was studying. 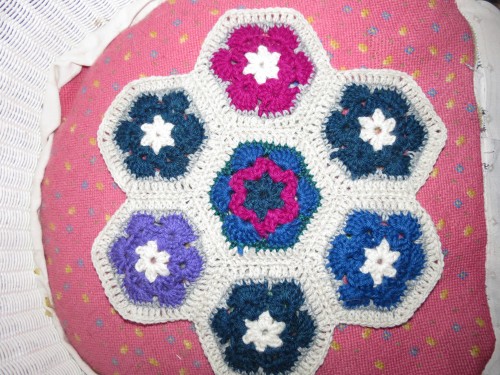 Here is a better pic of the African Violet mat I mentioned last time. 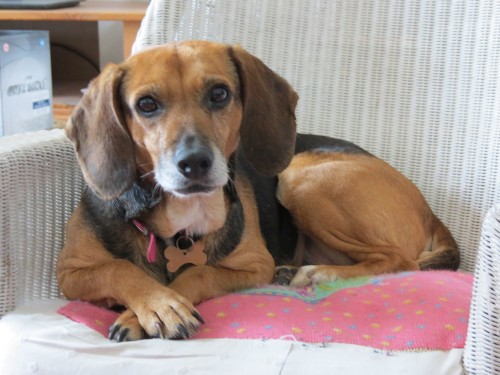 Lyla is settling in well. She sits here and I’m allowed the pink bit when I type. She is so tiny- only 40cm at the shoulder and takes a 16″ coat. I found out this week that there is such a thing as a Queen Elizabeth Beagle, which are smaller than a conventional beagle. I think she is one of those. 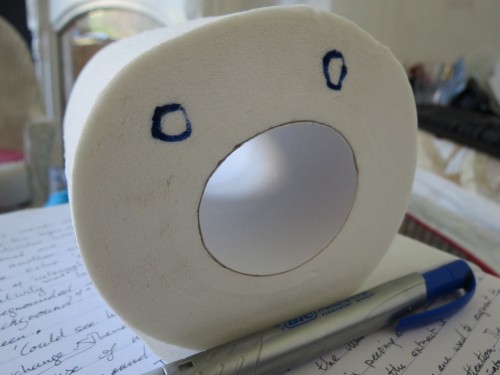 Son was so ill while helping me type up the final assignment that I made him his own toilet roll pet. LOL Today I had a panic about a reference for the assignment and was trying to find it, but no good. In theory I have until midday tomorrow to tweak anything, but I don’t think I will. 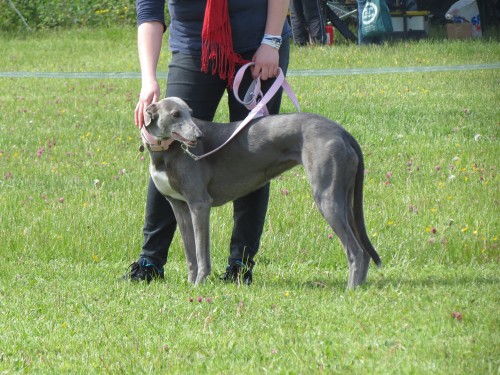 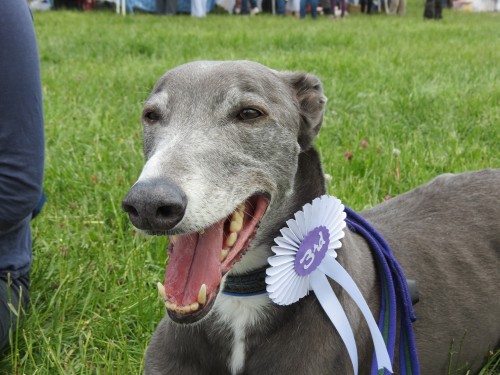 Bungle entered the fastest sausage eater, unfortunately he tripped over the first sausage but he was happy with a third place and lots of tasty sausages to the finish line. 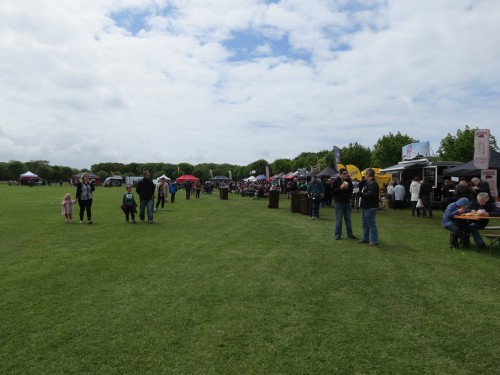 Then today it was the food and drink festival here in town. 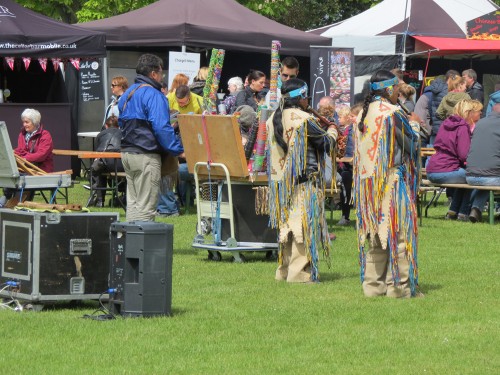 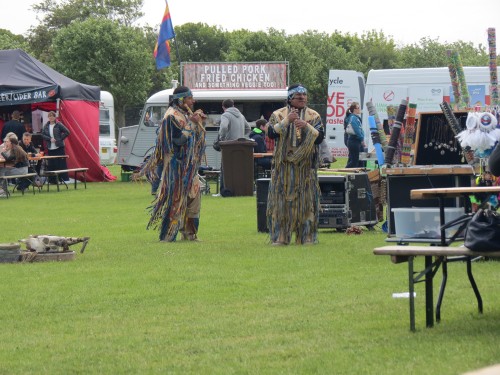 and stalls spread over the main field of the park. 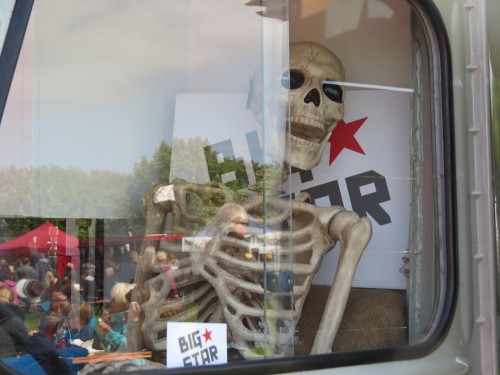 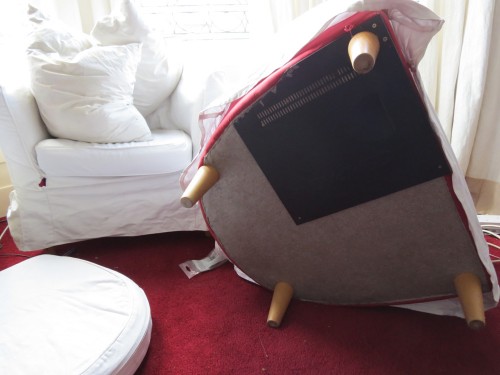 We got back and son and I looked at how we fixed one of the Ikea chairs with the side of an old computer case, as the other one’s chipboard base had gone, so the legs were wonky. 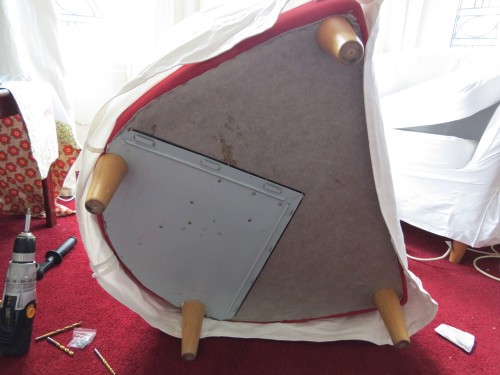 A bit of measuring, marking, angle grinding and drilling and we were all set to put it back together. Only we couldn’t. one of the legs was missing.

By that time I had brought a heap of laundry into the room to be folded so we looked through that, we looked under sofas, we turned both chairs the right way up just in case it had gone between the cover and chair. No joy.

So we concluded that the poltergeist is at it again!

Finally a better pic of the whole strawberry set for the one day box age 1-2 years.

I’ve also got one mitten half done, a jumper started, a skirt whose hem needs cutting and pinning level (how do you do that when it is for you??? all tips appreciated.), the Quilting Mouse quilt top which needs cutting for the stitcheries, a Fairy Tale quilt which needs the appliques sewing on, Pumpkinville Quilt which is only half made, (well it is needle turning), a head chock full of ideas, and I’m going to do a Schnibble sew along that Michelle told me about in July. Just looking at that lot, I think I need to do a Post of Shame, on the half done bits I need to finish off. LOL

I am so glad to be back here. I’ve missed letting my thoughts be creative, so they’ve been under lock and key and not allowed out of text books. First though I need to rearrange the craft room…. I have a wee bit of a confession. well it was a school getting rid of old stock…. and they weren’t too far away…. and they were Bernina…. and my Bernina was making crackling noises at the time….(was wires touching where plastic sheathing had come off by where you plug the power cable in, now fixed) … so I didn’t want to be without a machine did I?

Ok I fess up, I am House Elf and I bought 2 second hand machines- another 830 and a 1630. In fairness m’lud, they were cheap, local and I got one working straight away and it is that one which did the latest batch of leads and collars as it is set up with a heavy duty needle etc. The other I had the repair chap have a look at. He sorted the timing then I was able to work out that a button didn’t work, fixed that ourselves. In theory it should be able to do lettering now, I’ve got it to sew pretty leaves so far. So it means that I now have to rearrange the room so each machine can stay set up to do what it does best and I can play properly.

I’ve missed life how it used to be when I first started my blog, just experimenting with the latest idea from my head and seeing how it turned out. Hopefully I will have my mojo back properly now with one less ball to juggle.


Posted in Crafts, Travels by House Elf with 8 comments.