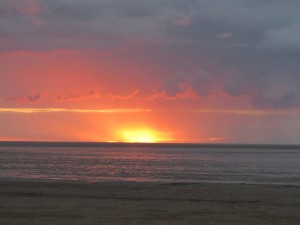 Sunset on the beach here. 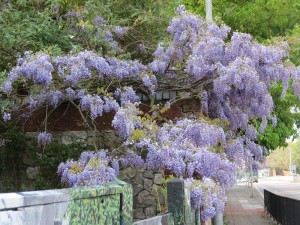 Wisteria in Portsmouth taken when we surprised daughter picking her up a day early. After packing, she and I took a little break in her park where she had made friends with the squirrels during exams. 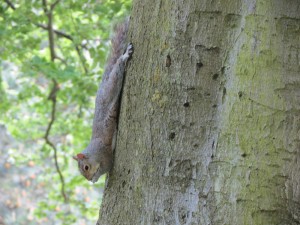 She is now in Peru- the plane landed in Lima and she is waiting for the Cusco plane. Thank you for helping her make this dream come true. 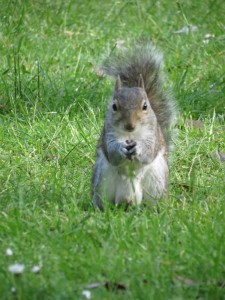 She very nearly didn’t make it after missing the bus in Southport on the 15th. She mis-remembered the number of the bus, so we ended up dashing across country to catch up with the bus in Liverpool using it’s on-line tracker. 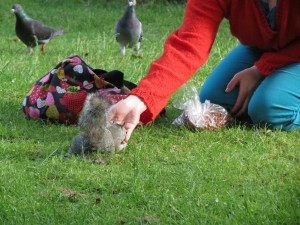 With such a start as that I wondered if she would get to Peru or end up in “Timbukto in darkest Africa”, as my old books say. 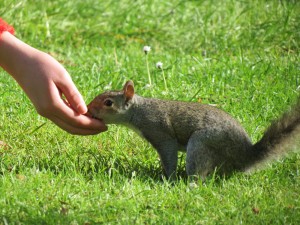 We wont hear anything unless there is bad news until she lands at the end of the month. She gets back here on the 2nd September, so her blog will start telling us all about it then.

I am so excited for her! I can’t wait to hear all about it. 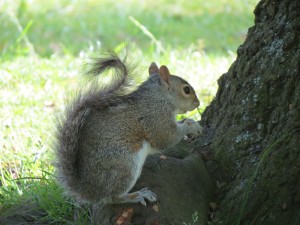 She’s been working very hard to have enough money for the inoculations and the extras like a trip up the Amazon and the Nazca Lines. 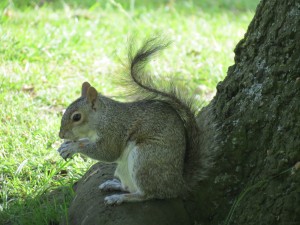 I have mentioned how I like Peruvian textiles…a few times. 🙂 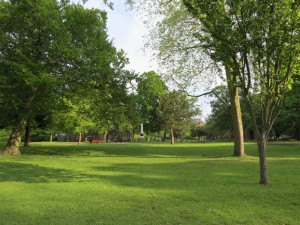 But it is more important that she comes back safely having had a dream trip which she can treasure forever, unlike these 2 girls. 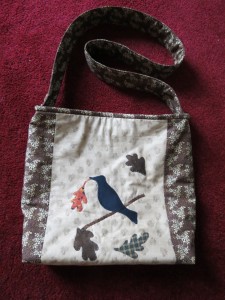 Sorry I haven’t blogged in ages. I have managed a couple of things in spite of my finger. I was hoping to have the splint off this week but they want it kept on for another 2 weeks. Pah!

This is a UFO finish for the Craft Olympics. The fawn panel had been bonded in 2008 and then sat there, and got moved around the craft room, and eventually hidden away. When Sylvia had a UFO section to the Craft Olympics, I knew I had to do something with it, so here it is- a bag. 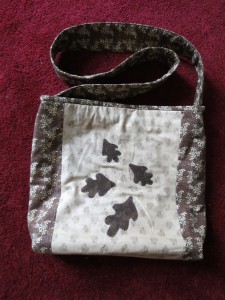 The strap and side panels are in a William Morris fabric I picked up in Portsmouth. I bought some last time I was there too. 🙂 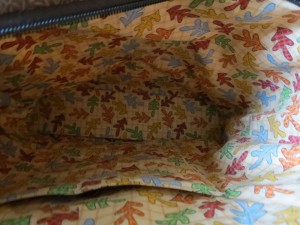 The lining keeps the oak leaf theme going. It has pockets and a covered thick card base for stability. 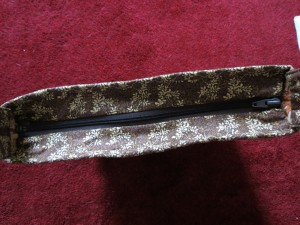 I reused an anorak zip for the top and bound the top edge in the same William Morris fabric.

It feels good to have finally done something with that bonded crow and oak leaf which were left overs from a 2008 project themselves, and just put there to be useful one day. I didn’t think it would take 5 years though!! 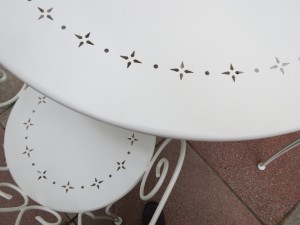 As we finally had a Summer, I decided to get a patio set for this house. It’s been on my list for 10 years, so it wasn’t a frivolous whim no matter what darling husband says. I waited for the 50% off sale. 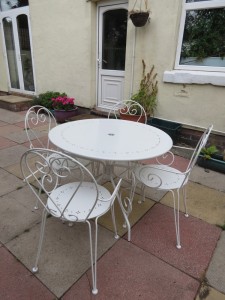 And then bought this ultra girlie romantic set which he hates. 🙂 I told him I will charge him to sit on it. Hee hee. 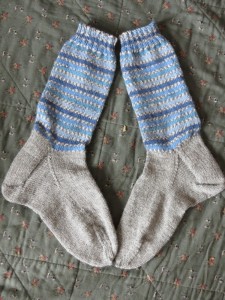 The only other thing I have managed is this huge pair of socks  for Son from Finnish sock yarn I bought with Ulla. I can just about manage the small sock needles with this splint if I work a little at a time. Daughter had the rainbow socks (last blog post) so it is now fair again.

Sorry I’ve not been visiting. As you can imagine, typing with this splint, is hard. Here’s hoping it can be gone soon. Good news though is that my back is the best it has been in a decade, and I no longer need physio. 🙂