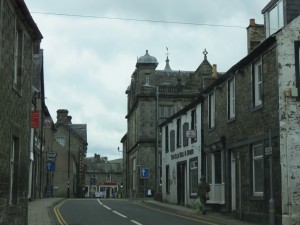 Maybe the title of this post ought to have been “West to East and then some.”

We took little roads going through some towns which clearly had a “Scots Baronial” architectural influence. 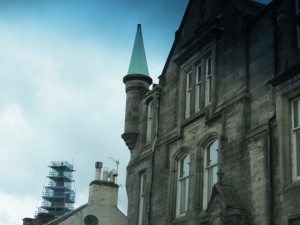 But as this area is called the Scottish Borders, was it really surprising? 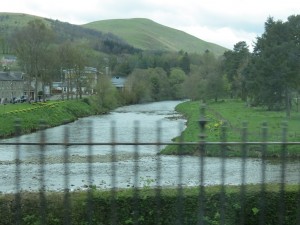 I kept having the words to “Flower of Scotland” running through my head.

Those days are passed now
And in the past they must remain
But we can still rise now
And be the nation again
That stood against him
Proud Edward’s army
And sent him homeward
Tae think again. 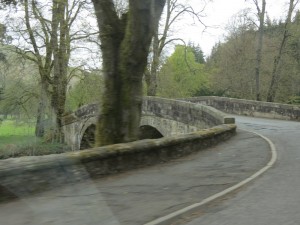 You can hear it sung here. 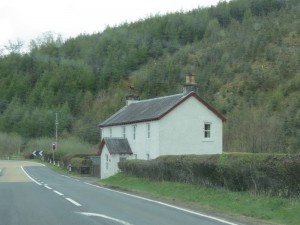 Proud Edward was Edward II of England. He was forced to retreat by Robert the Bruce in the Battle of Bannockburn in 1314. The Scots only had 1/3 of the number of men compared to the English. 1/3 of those lost their lives. They are the flower of Scotland referred to in the song. 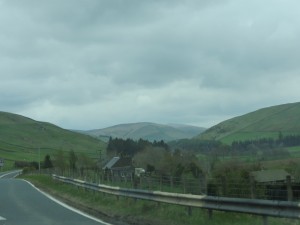 I can understand why they wanted to fight for their independence and the freedom they had. England had fought and lost against the same Norman-French less than 300 years earlier in 1066. 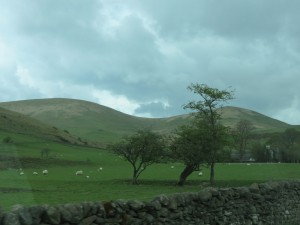 Who wouldn’t want to fight for this beautiful “wee bit hill and glen?” 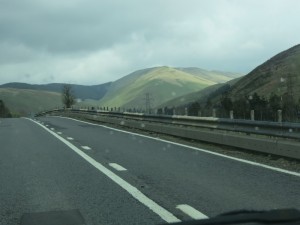 This landscape is stunning! 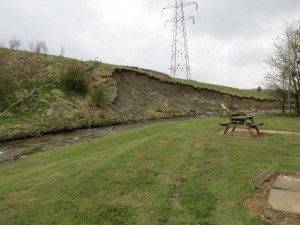 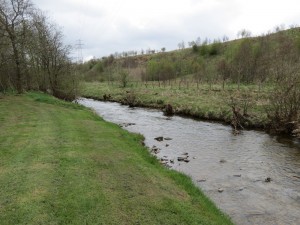 by a musical stream. 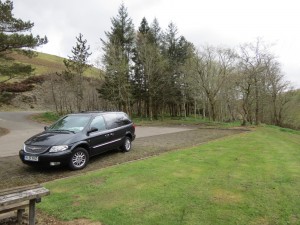 We could have sat at a bench amongst the trees but when it rained we ran for the car. 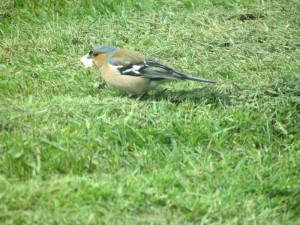 I shared mine with a Chaffinch  (Fringilla coelebs) 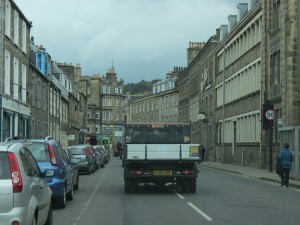 But let us head further east in what is now mainly England as the border isn’t a straight horizontal line- it heads North Easterly up to Berwick-Upon-Tweed. 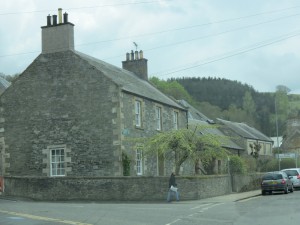 Some views wouldn’t be out of place in the Cotswolds, 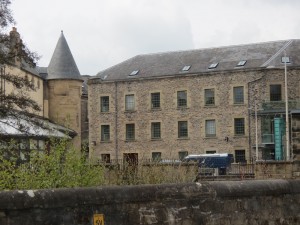 where-as some show the Scottish influence. 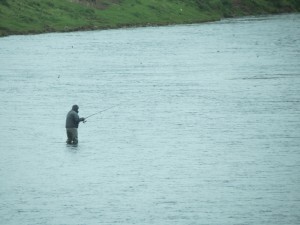 This pic is for you Ulla. 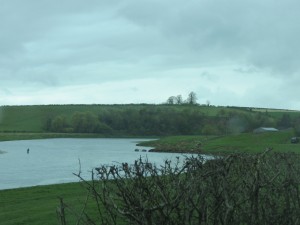 How I managed to take it as the car was travelling is a minor miracle. You can see the fisherman as the dot in this pic. 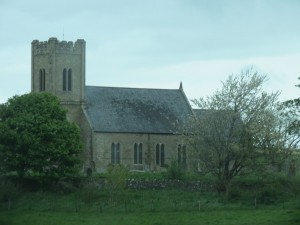 This church is on the high ground just to the right of the previous picture. 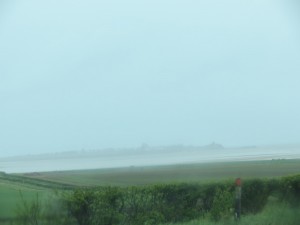 This is the 1st view of our next stop.

Can you guess where we are going? 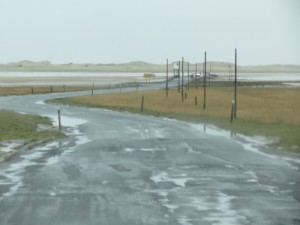 The tidal causeway is a clue. 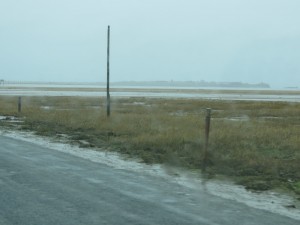 The tall posts mark a footpath called Pilgrims Way over the sand at low tide. 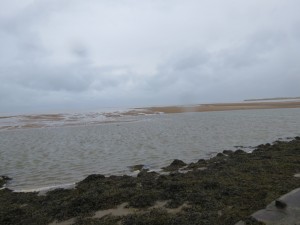 Give up? We’re heading to Holy Island and the village of Lindisfarne. 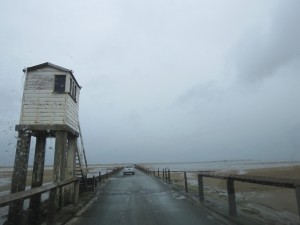 If you get caught out by the tide, you can take shelter in one of these huts.

If you are travelling by car, I would put my foot down!!!

We checked here so we could time our journey to cross at a safe time. 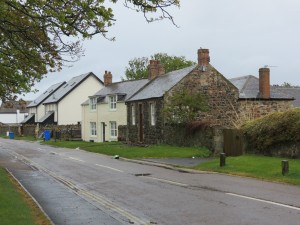 The village is very peaceful even with tourists. 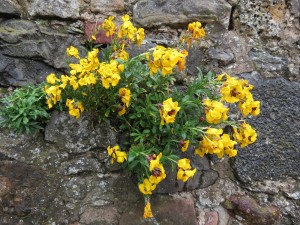 The island smelled of wallflowers. 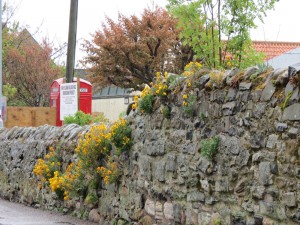 They seemed to grow like weeds in most walls.

The Legend of Wallflowers
• Robert Herrick ( 1591-1674), known as ‘The Cavalier Poet’, immortalized the wallflower in verse. He wrote about a tragic accident that occurred at Neidpath Castle on the banks of the River Tweed in Scotland. The Earl of March’s daughter, Elizabeth, had fallen in love with a young nobleman from a rival clan, Scott of Tushielaw. Her father wanted her to marry the future king of Scotland instead. The strong-willed Elizabeth refused and her father locked her up in the tower as a punishment. The handsome Scott disguised himself as a minstrel and serenaded her while they made plans to elope, but when the time came Elizabeth fell to her death, landing close to a sprig of wallflower growing along the tower’s wall. The broken-hearted Scott set off to wander through the land wearing a sprig of wallflower, and this flower still symbolizes faithful devotion.

‘Up she got upon a wall
Tempting down to slide withal
But the silken twist untied
So she fell, and bruis’d, she died.’
from “How the wall-flower came first, and why so called”,
by Robert Herrick. 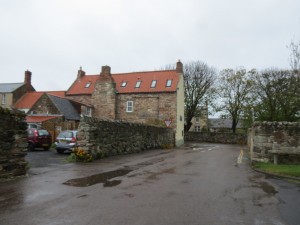 So imagine that smell in the damp air (it rained hard as we crossed the causeway) as we walk through Lindisfarne village. 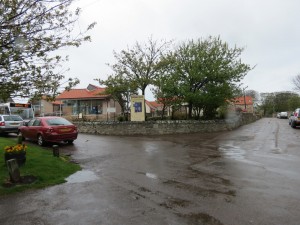 Some houses are holiday lets. 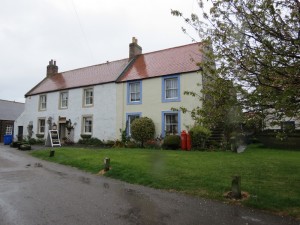 But the village has retained a quiet charm. 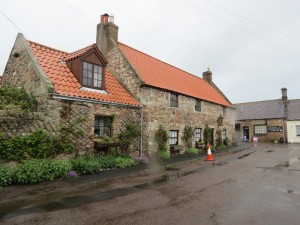 Next time we explore Lindisfarne Priory.


Posted in Travels by House Elf with 5 comments.