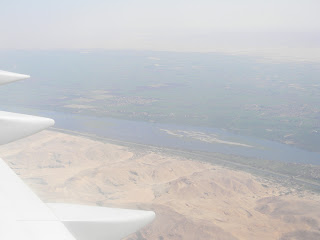 View of the River Nile. Just see how narrow an area either side of it is able to be used. The rest is sand dunes. 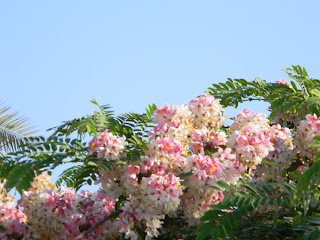 Just look at the sort of flowers which bloom though! If you haven’t organised a visa have $15USD ready for it at Luxor Airport. Some people milling around will try to scam you and want English currency then they will pocket the difference. It is better to do this yourself at the kiosk marked visa, then join your travel rep. 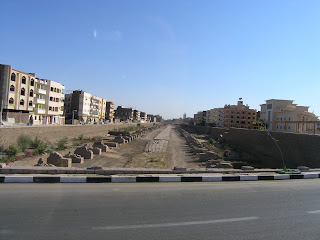 We were taken by coach from the airport to the cruise ship. The road crossed over the recently discovered “Avenue of the Sphinx” which links Karnak and Luxor Temples. No one knew this existed until a road was needed! Sphinx info here. 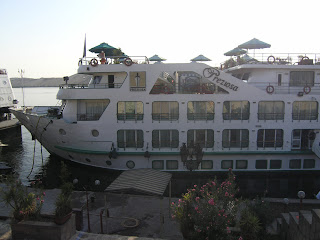 This is our home for the week MS Grand Preziosa. There is a virtual tour on the link as well as ship info. 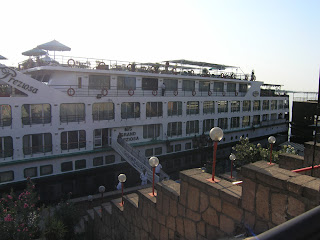 It felt very safe as there were security men guarding the dock as well as onboard security.

There was a call to prayer when I stood on the top deck. This to me was the sound of Egypt- it happens 5x a day as 85% of the population is Muslem. On this occassion 3 minaret towers seemed to create a harmony. I panned around so there is wind in some sections. The mountains you see are where the Valley of the Kings are. The pylons in the background near the umbrellas are from Karnak Temple. 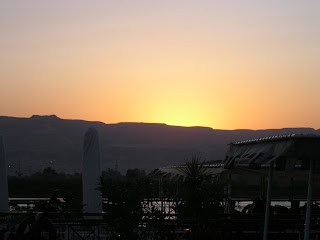 Sunset over the Valley of the Kings mountains. 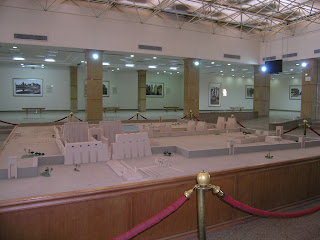 In the morning we went to Karnak Temple. You can see the pylons in this model which you saw in the video. Egyptian Temples have a similar layout to one another. 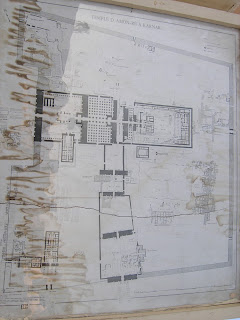 You enter from the bottom of this diagram past a series of pylons framing open courtyards into a collanade of pillars and eventually come to the santuary or “Holy of Holys.” Everyday people were only allowed as far as the first open courtyard when this was a sacred site in the 18th-20th Dynasties. 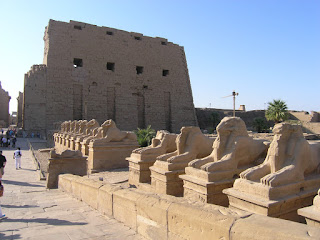 This Spinx Avenue led directly to the Valley of the Kings on the West Bank of the Nile. The West was always associated with the dead as that is where the sun “dies” so tombs are usually to the west. You can see the first pylon in the background. 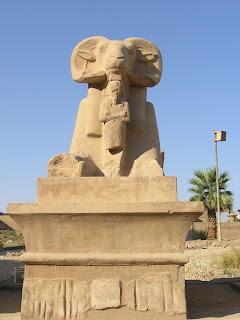 Ram’s headed sphinx with the pharoah responsible for building it protected between its paws. 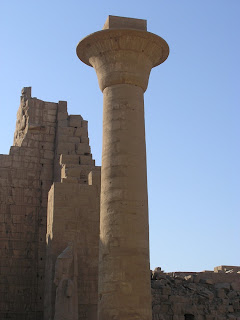 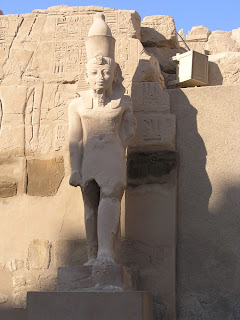 Statues of pharoahs have their left leg foward showing them to be decisive powerful leaders. It is the same on the engraved hieroglyphs on the walls. 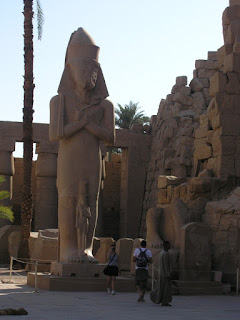 Osirus (dead king and king of the dead) always has his legs together and his arms crossed (like mummies) to show his power over death. The above pic is to show you the scale of the statue. 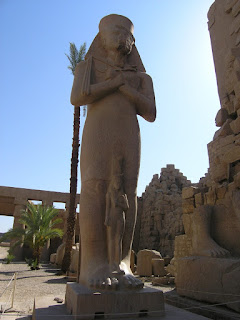 The statue between his feet is protected by him. 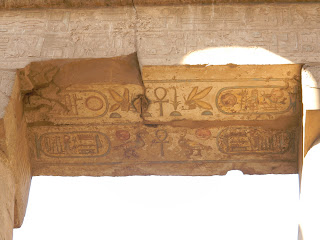 I was amazed by how much of the original colour still survived on the underside of the stones. 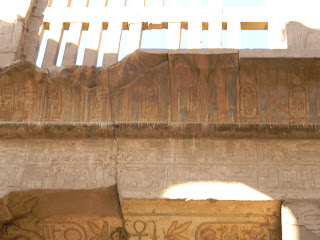 We just don’t have that sort of survival in England because of the wet weather and frost. 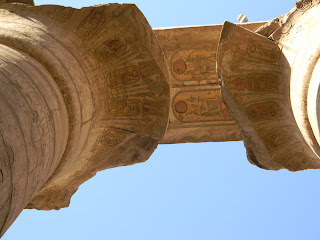 Just imagine how colourful and awe striking this whole huge complex would’ve been! 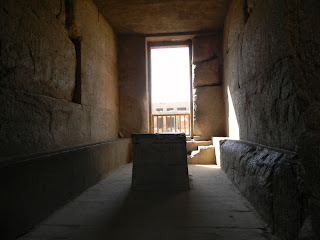 This is the altar in the Holy of Holys. The walls are full of propaganda about how great the pharoah was and how the gods had blessed him to be the leader. In an age when few people were literate, the stories were told in the pictures on the walls everywhere. No wonder so many pharoahs added bits on to this place. 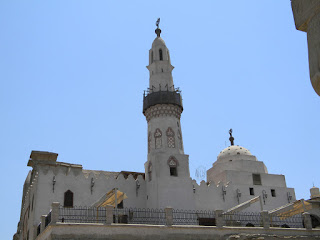 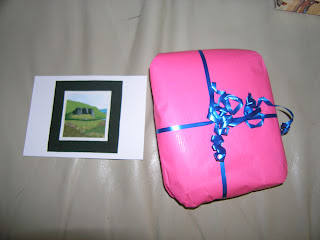 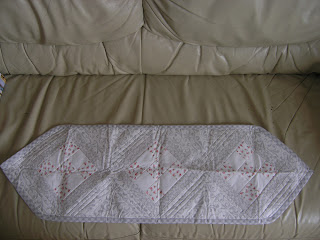 A gorgeous table runner in silvery greys and roses. I told her it reminded me of those misty mornings when the dew is still on the roses before the sun has any warmth and makes it evaporate. 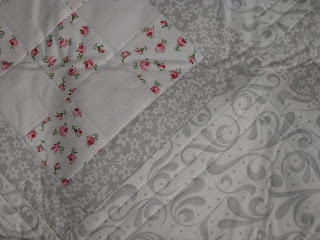 Thank you Anne Marie. Now I’m looking for 3 volunteers who would like to receive something from me before the end of the year, who would be willing to make something for 3 people in turn. Any takers? If I’m lucky enough to have more than 3 I’ll put your names into a hat. 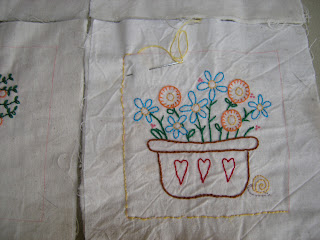 I didn’t manage much sewing while away. I had some help from a charming 11 year old lad on the border to the above stitchery for My Garden by Lynette Anderson. I made all 9 into stitcheries with no buttons or appliques so I could sew while away. 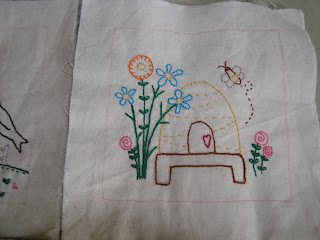 I’m also making them in bright colours unlike the original idea. 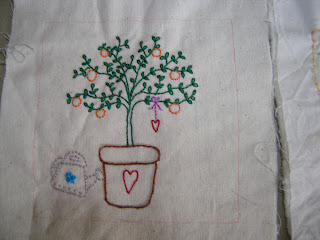 This one was only part finished in Egypt. The one below was done since getting back. 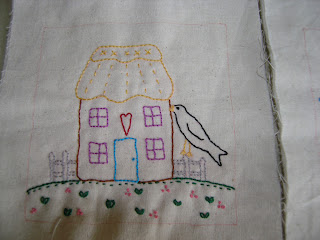 Posted in Uncategorized by House Elf with 17 comments.