Apr
22ndUK Catch up and makings 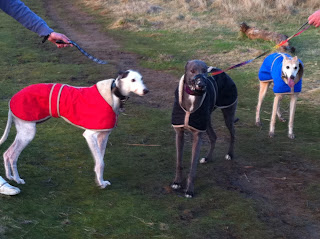 Sorry for the quality of these first 3 pics taken with phone. The hounds walking by the sea one cool evening. 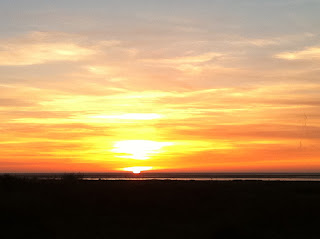 The sunset on the sea was beautiful. 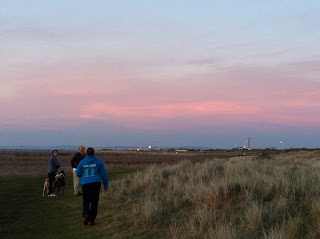 It made the sky pink over the sand dunes.

After a lot of talk we have solved the camera problem. The disc was put in the spare camera but the computer still wouldn’t talk to it. Another computer tried to talk to both cameras but still nothing. Then over a lunch we put our heads together and tried a new connection lead. Eureka! I can now share pics! 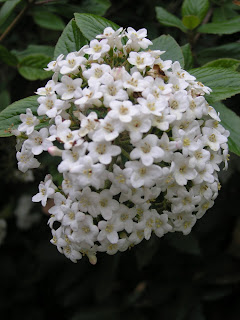 The garden has been filled with the scent of viburnum. 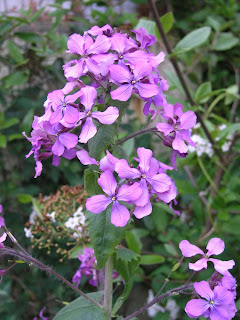 Honesty (Lunaria) is in flower. 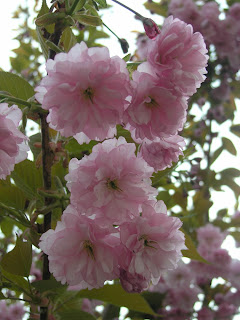 The flowering cherry tree tells me it really is Spring! 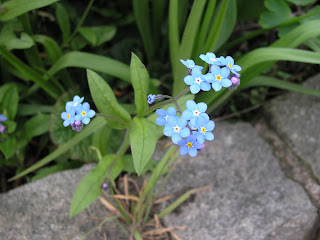 Forget-me-nots- just for you Aimee. 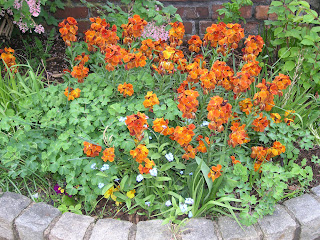 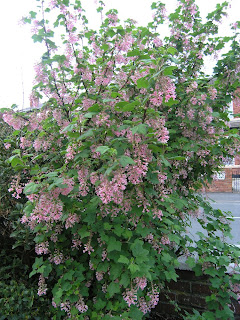 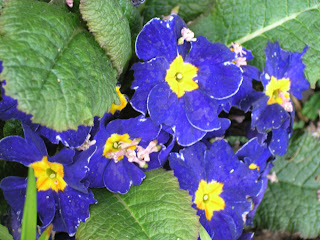 The end of the primroses. 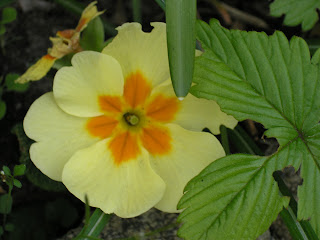 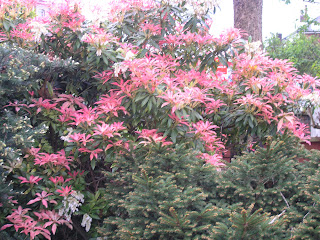 Pieris- the new pink growth will go white then green. 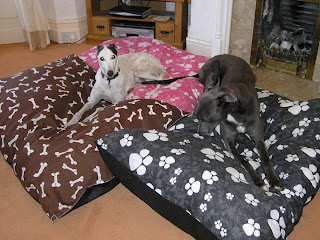 We’ve been to a car boot sale and bought new dog beds. Precious and Bungle are modeling them. 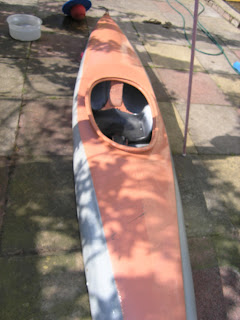 We also got another canoe. It needs repainting but no local shop sells marine paint. 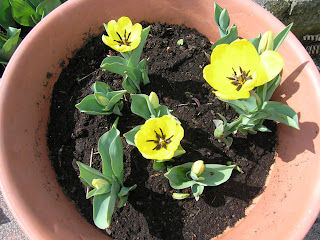 There are red and yellow tulips in this pot but only the yellow are up so far. These were quick though as I only put them in the morning after we got back from Holland. 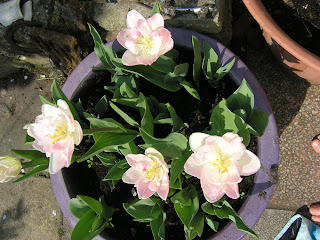 The white ones have pinkish tones but where are the blue also in this pot? Is this a mystery worthy of the gardening TV detectives Rosemary and Thyme? 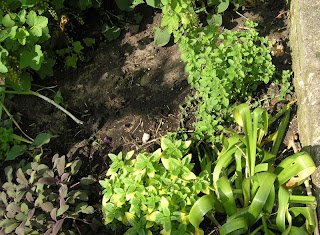 I cleared out some plants to make room for some fresh herbs- marjoram, parsely, purple sage and oregano. 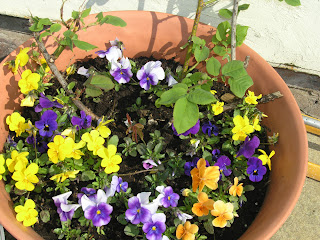 I was given some violas. As they self seed I put them in this pot. 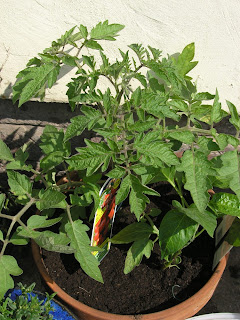 Having made the mistake of planting a whole seed packet of Gardener’s Delight tomatoes one year and have all 200+ seeds sprout- I now call the variety Gardener’s Fright, I bought a single tomato plant and a pepper. I will keep them outdoors as we are having 20C+ temperatures at the moment. If it gets cold they will go inside. 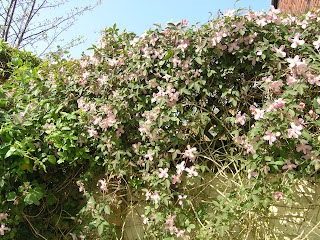 Clematis montana is loving the weather. 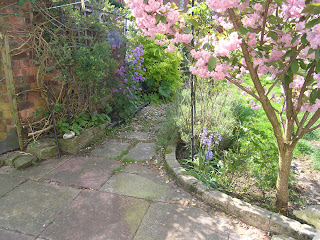 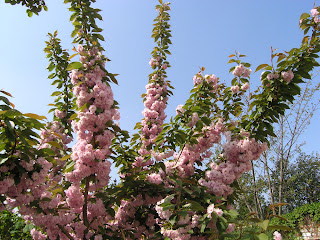 Love the pink with the blue sky. 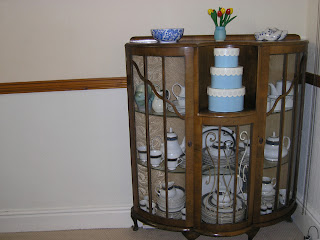 Inside I changed the china cabinet around after moving it to paint the lower wall. The hall and stairs are now finished. 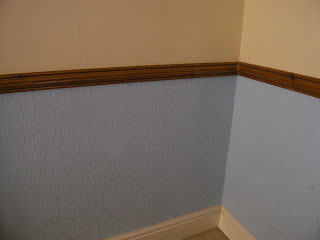 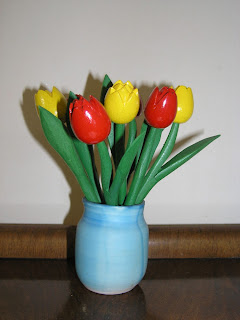 A little souvenir full of Spring. 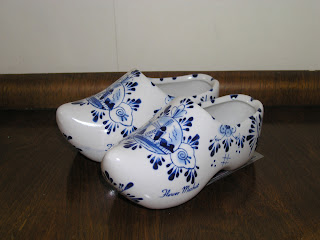 There is a Dutch theme on the cabinet for Spring. 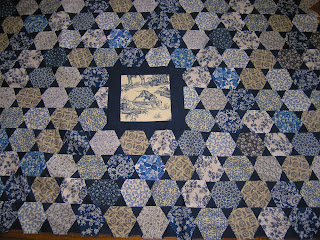 In the craft room a mistake was allowed to carry on by Lovely Husband. I cut the blue triangles too small and was going to replace them with bigger ones but he liked the mistake. It will be for his birthday next month if I can figure out how to enlarge it to lap quilt size. The toile hound and duck in the centre is the one from Holland. 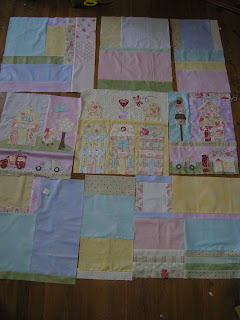 The backgrounds for Tiny Town are now all sewn together so all I need to do each month is put the applique on and blanket stitch. This makes it a good quiet project for the evenings when the children have gone to bed. I will be carry on showing one a month with Anne Marie. 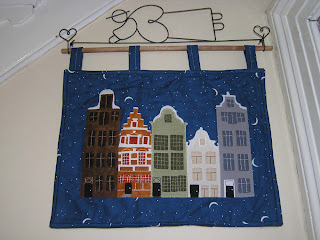 Canal Houses is also finished. I ran out of white embroidery thread and found a place on the internet where they are only 40p each rather than £1 ish. 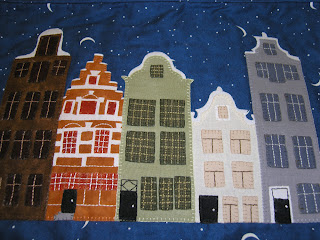 I like how it turned out. It reminds me of that song about Van Gogh by Don McLean Starry Starry Night. Go to the link to see a montage of Van Gogh’s paintings as you listen to that beautiful song.