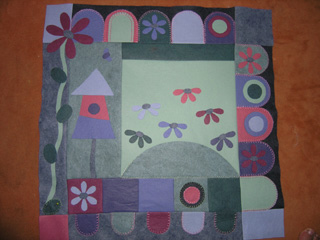 I was in class yesterday making this wool felt wallhanging. I am thinking though that it would make a lovely big snuggly cushion instead. As you can see there is a lot of perle 5 sewing to do on it. 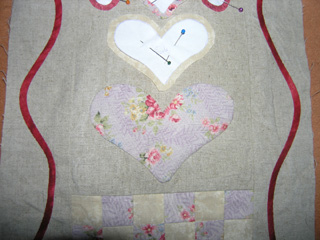 I made some progress on the Angel in the Garden bag… not much though. The bias strips and one heart so far. This needs to be done for the 8th August. I’d better hurry.

We found out last night that son who hasn’t been himself lately has scarlet fever! It was only when the rash appeared on his throat and I looked it up that we found out. We think his sore throat/ear ache of last week combined with swimming in the lake when he and hubby came to pick us up, are what caused it. The Dr has him on antibiotics now, and is grounded for 5 days as it is infectious. Moral- don’t ignore a sore throat. For some reason I thought scarlet fever had been eradicated. Bit worrying as there is this swine flu taking hold in the UK and people who are ill already are more vulnerable to it.

I’ll tell you about that little trip to the Lakes now:

This was home 5th -10th July while I accompanied daughter and her friends to the same campsite we had taken friends to. The girls crammed into the biger tent and I had the little one.

We were originally going to all be in one big tent but ooops! we arrived on a Sunday without the poles in the bag (huge hurried self kicking went on) and had 10 minutes before all the shops shut at 4pm to quickly buy more poles or other tents.

If only tent companies realised that if they made the original bags bigger the poles would go back with the tent and not get lost. I have yet to meet a person who can fold the tent up and get the poles back in the bag provided.

I have a feeling I will be making some tent bags soon from some upholstery fabric off cuts. Oh my won’t they look like fun! Can you just see it the serious campers with their plain nylon bags and then we roll up with a natty number in bright florals? ROFL

Inside my home- I had all the food and equiptment as it was a 2 person tent. This was so exciting for me- I hadn’t had a tent all of my own since I was about 7 and camped in the garden! Since then I’ve always been in the big tent with hubby and children. It was so much fun to read by lamp or torch light in my sleeping bag.

I wasn’t quite alone though. I bought a little companion called Coniston for part of the week. Could you have left this adorable chap in the shop?

In one of the barns shearing was going on.

Which meant some of the sheep came through the campsite. The line on the pic is my guy rope so you can see how close they were.

When the cows and calves came through I started humming the Bonanza theme tune. LOL

Then came the goats one morning. By this point I didn’t bat an eyelid over my cup of coffee. 🙂

I took more pics of the walk north into Coniston village.

Stream under the bridge and unusual gate posts.

A waterfall “scarf” on the neck of Coniston Old Man

Just past it a co-op shop for groceries and fresh food. Lovely long and short quoining stones at the edge.

Looking back along the street. There are a lot of shops for camping, hiking and water sport things. That was very good for our hurried dash.

The institute is just at the end of the village. To its left is the path to the Ruskin Museum.

Shops line the other side of the road too where you can buy souvenirs as well as practical things like stamps in the post office.

The road to the east has more shops and St Andrews church. The link has the history of it.

It was built in 1819 to replace an Elizabethan one made by the Le Fleming family who built the hall I showed you before. Outside there is Ruskin’s elaborate carved cross designed by WG Collingwood which I have showed you before.

I didn’t show you inside though did I?

Window behind the altar.

Closer look at the altar.

The mountains are visible from almost everywhere. This cafe did a lovely afternoon tea. While we were there a group leader came to the ice cream window with 20-30 children all wanting a different flavour ice cream. In the end it involved pen and paper to get the right number of each flavour. I was so thankful at that point that my group was little. 🙂

On the way back to the campsite. The hay is ready in the fields.

Beautiful floribunda rose on an arch.

The clouds quickly gathered as I sat watching the girls on the lake with a spot of knitting. 2 of the girls weren’t strong swimmers or rowers so I made a rule of sitting by the lake if they were on it.

The weather changes so fast here and you can’t always see the rain clouds when they hide behind the mountains. So if you visit, bring a swimming costume, walking boots, souwester and the local treat of Kendal Mint Cake. It’s a sort of icing sugar with peppermint oil slab which is high in energy for long walks.

The skies were so pretty. I must’ve had camping on the brain because this cloud looked like a hammer. A normal mallet wont get the heavy duty pegs in such stoney ground so we’d packed a proper claw hammer.

With night of course came things like the toasted marshmallow eating competition, stories, magnetic board games, cards, and giggling. So much giggling. Can the collective term for a group of girls be a gruesome? LOL

Seriously though they were there to try at camping themselves, they wanted to learn how to cook on camp stoves, do the washing up, take care of the camp and maybe have some adventures. 2 of the girls are avid Famous 5 by Enid Blyton, readers so I tried to oblige.

I hope you enjoyed this little tour. Next time I will take you south along the west side of the lake to Torver Common.

Posted in Uncategorized by House Elf with 17 comments.