Yesterday as I was popping out of the house, I was astonished to see so many butterflies on the cotoneaster bush by the front door.

There are at least 4 in this picture.

So so many and this is after I had initially disturbed them by coming out of the door.

Son ran for my camera for me, and I caught these Painted Ladies who live in North Africa in great numbers according to my book. They migrate out of necessity when food becomes scarce. They are there again this morning. I wish my buddleia was in flower so they could go on that too. I feel honoured to have such a well travelled visitor come to stay.

Also in the front garden Roseraie de l’Hay rose is flowering with a gorgeous smell.

Bottom of the garden- rose, geranium, clematis armanii (orange flower scented blooms) and lavender. Ooo should’ve taken a pic of the goldren philadelphus (Mock Orange) as that has started to flower too. It smells so wonderful. I think you can get flavouring for cakes that is “orange flower” scented.

Grenville one of the gargoyles looks amused to have a rose above his head.

Love the colour of this one. 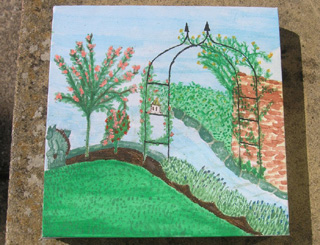 Well the above is the result of an afternoon in the sun yesterday sat on the trampoline with the children and one of their friends on a sleepover. We all painted what we wanted. I did this idealised and not quite right painting of part of the garden. Of course I didn’t show how scrappy the lawn is, and the mess. 🙂 I promised myself that I would blog all my efforts when I started this site, so there it is.

Here are some things which are in the painting. Roses over the arch.

La Reine Victoria rose. Those 2 are my fav roses. The poor bushes have been travelling with me for a long time.

Lupus my other gargoyle under the cherry tree. 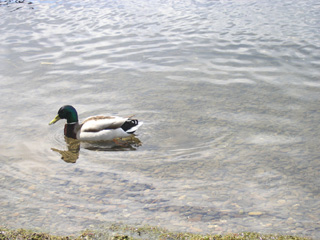 So now you have seen how poor a painter I am, you can understand why I love Rima Staines work. Here is my birthday present “Spring Crow” from the family all framed and with the others in the series. 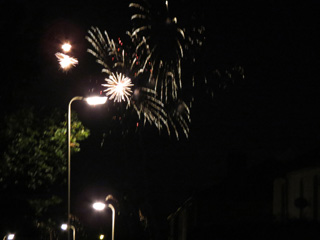 This is how I think I will display them- the gap is for Summer Crow. Spring and Summer at the top, down for Autumn, and across for Winter so the seasons go round in a circle- circle of life. I love how she has got the colours just right for the season. 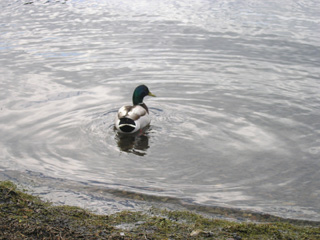 Verandah Views Bom 3 is finished, and 4 started. Number 6 is out in June so I must hurry. 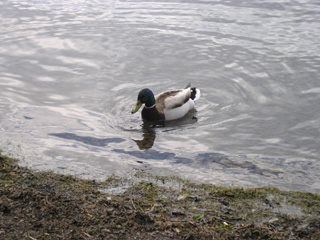 Son is a World Of Warcraft guild leader so has been living on the computer most o the holiday (silly boy!). The chair isn’t the right height for the little table so his wrist was starting to hurt. Inspired by the sew tidy, I came up with this mouse mat. 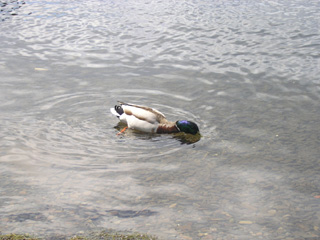 Here’s how I made it:

The mat part is a 11 1/2″ square doubled with pellam as a lining. (It has rough dots which add to the texture for the mouse.) Sew right sides together leaving a turning gap. Clip corners turn sew up gap. Top stitch close to the edge.

The wrist rest is 4 1/2″ x 11 1/2″ doubled. Sew as above omiting the top stitching. Stuff with fibre fill at the top and rice underneath so it doesn’t sink too much but is comfy.

Sew round leaving a turning gap, clip corners, turn, and sew up the gap. The pocket can be divided as much as you like with a straight stitch running vertically. Son needed his for his “digi-pass” which apparently stops people from being able to use his account…or something.

Lastly I put all 3 elements together, by hand sewing on the 11″ edges roughly in the centre of the wrist rest, rice side (underside), where the join is covered by the wrist rest.

Back to Oxford- gosh I am so behind with my tour of the place! The court buildings. 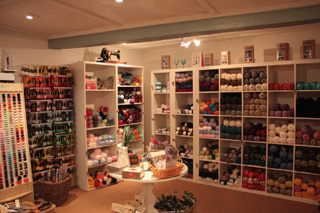 Handily just next door was the prison. This used to be a barren car park with the big gates at the back of the picture as the prison entrance. The prison was closed in 1996 and the site redeveloped. 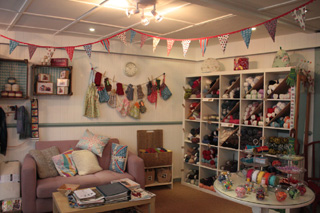 I used one of the few shots I had left on the camera on this. Ooo lovely lovely lovely! Most of the pics are curtesy of Lovely Husband. 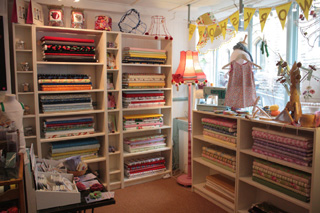 This was the Debtors’ Tower. The photograph was taken from what was their own separate exercise yard. Re read Charles Dickens for graphic descriptions of what a debtors prison was like. You had no food entitlement so had to rely on relatives to bring you food. There are examples of people starving to death in the history of the prison in spite of pleas to the magistrates for aid!

The prison site is on the original site of Oxford Castle– loads of links. Little glimpses remain. 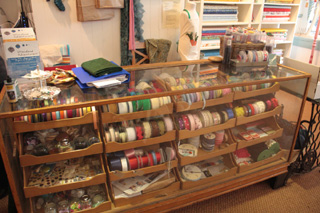 From this angle you can only see the top of St George’s Tower. This is the oldest standing secular structure in England I think. It dates from the Anglo Saxon period and would’ve been part of Oxford’s defenses. The town is laid out in a cross formation with later smaller roads coming off it which points at an Anglo Saxon foundation date.

For those familiar with the Cadfael books by Ellis Peters, this is the tower from which Empress Maud Escaped and joined Brian Fitzcount at Wallingford Castle. Empress Maud and her cousin King Stephen (William the Conquer’s grandson) fought for the crown of England. 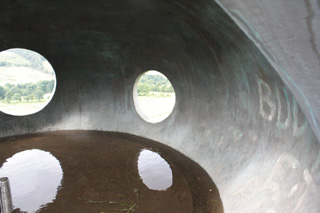 The other side of the tower is the mill stream which was a defensive river back then. The legend is that in December 1142 A.D. the river froze over while Empress Maud and her troops were trapped there under siege by King Stephen’s troops. She escaped by climbing out of the tower camoflagued in a white cape in the snow, and fled the 13 miles 21.5 Kms to Wallingford. 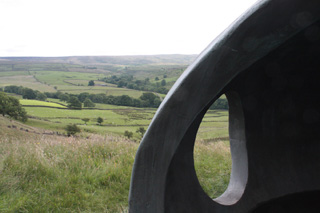 There is a strange juxtaposition between the old and the new just looking round.

I am so sorry not to have got a photo of The Mound. It is the motte from the Norman Robert d’Oilly’s 1070s A.D. castle with a well room and vaulting deep beneath it. A castle was only as good as it’s protected water supply in a siege. It used to only be opened on one day of the year but now it is part of the tourist attraction. As a child it was a place of mystery and fascination, so when I found out the day, I was there by the gate waiting with my daughter in a sling on my front.

The prison is now a hotel called “Malmaison” -bad house! LOL There is a tour here which briefly shows a little of The Mound as well as the prison cells all made over into rooms. 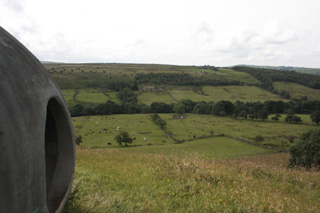 My friend worked on the development so we went inside. This was once the prison landing. One room downstairs near the bar has been kept as a cell. Up to 4 people could be crushed into the tiny room (more usually 2). It was very bleak with hard surfaces and a bucket for toileting! 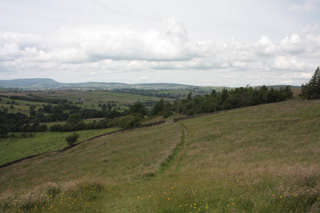 Net to prevent accidents would’ve been stretched over this space but now it is carpeted and cells have been knocked through to provide larger rooms with ensuite accomodation.

It has appeared in several films including 102 Dalmations and episodes of Morse. For those who are interested in more of it’s 1000 year history click here.

The old exercise yards have been turned into places where craft markets are held (I bought beautiful shell buttons- sorry no pic). They will probaly appear in a making at some point…something special. 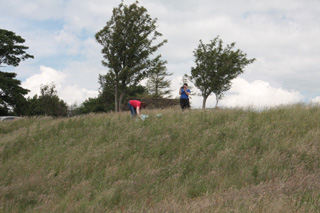 It felt so strange only having seen this place from the other side of a razor wired fence, and it looked grey and sad and now the atmosphere is happy and open to everyone. 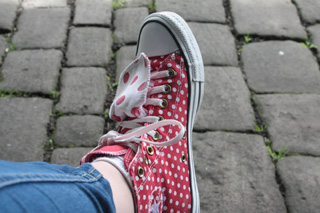 Lastly a little nostalgia for me at the site of the old West Gate of the city. This very old building (1600s A.D.) “The Liason Restaurant” is where Lovely Husband proposed to me.

There he was down on one knee “Will you-” then the Chinese waitress came up and asked us for our order. Red faced Hubby stood up and we placed our order. Then furtively he looked around making sure she wasn’t returning, got back down on his knee and asked properly. I accepted.

All prepared, he put his ring on my finger and it fitted.

We still laugh about it.

I’ve carried on whittling down the photographs so I think there are 3-4 more posts on Oxford left. One will be gargoyle themed. 🙂 I am so glad so many of you are enjoying seeing my home town. It is a beautiful place with an unforgetable atmosphere.