Welcome to Anglezarke Reservoir in Lancashire.

Water from the moors is carefully managed to run into the reservoir through steps and beds like this. 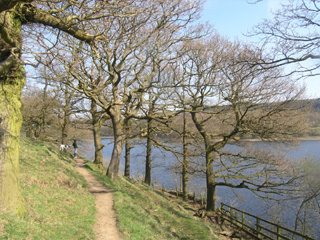 It is a very beautiful place-this is taken from the West bank. I had over 200 photos so I whittled down and whittled down to this one post. I hope I manage to share the feeling of the place.

Our walk took us all round this northern section and in a circle through the fields to the North of the reservoir.

This dead tree was striking. Also in this field were a pair of gate posts in stone still standing but not field left as the land had been flooded to make the reservoir. The water was needed for the rapidly growing towns nearby.

This gate post still had it’s wall. All the stone was quarried locally possibly by the farmer himself. We saw a lot of small scale open mines in the fields. Some were flooded so dangerous to explore.

Modern thorns of barbed wire with the old thorns of Hawthorn.

These concrete circles looked odd in the field. We thought they were something to do with water management underground.

Tiny berries on ankle height bushes. I’ve not seen them before so I think they must be an acid soil loving plant.

Old farms were located high enough up the hill to not get wet and boggy, but not at the very top where the wind would be fierce especially in Winter. This is the pattern in Wales too.

This was the main breed of sheep.

Pretty views of the moors.

This tree had a smiling face in it’s trunk.

Healey Nab- a small wood to the NW of the reservoir.

We then could see West to Chorley. In the centre of the photo is the 1st Morman LDS church which was built in England according to hubby. It is right by the M6 motorway and really has a commanding presence as you travel past being a very white grey with a tall spire.

So many of my photos were like this- trees and distant farm houses taken in beautiful pastures.

It was such a warm day Angel our resident hippo decided to wallow.

It was in another reservoir to the North of the main one.

We encountered a few stiles which seemed to be designed for small dogs. This one had a double bar at the other end. Angel’s expression could’ve soured milk, but she somehow limbo danced herself under it. If a dog could mutter about bad design, I think someone had a thunder bolt zap them. LOL

We then arrived in thi little hamlet. I can’t see a name on the OS map but White Coppice is mentioned in place names.

I loved the windows and doors on this cottage at the end.

It had immaculate gardens.

With a peaty stream running through.

A little reservoir at the side of the path with anglers on the banks. There were a lot of parked cars.

To my suprise we ended up sitting by a cricket pitch! I felt like I was taking part in the book Lorna Doone where we had somehow stumbled into Doone valley.

Other people were just sat around, so we sat too. Angel is over 70 in doggy years and was starting to think about a rest.

The cricket pavillion was selling the most delicious smelling bacon barms so I had a bacon and egg roll. Totally delicious especially as we hadn’t eaten.

We then walked along the Eastern side of the main reservoir at the edge of the moors. 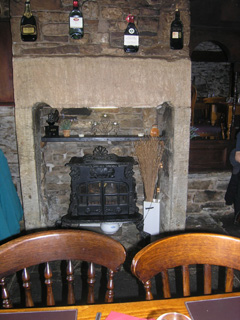 We stopped off at a pub for cold drinks on the way back- here is more of the local stone in use with an ornate wood burner. The flattened glass bottles were unusual. 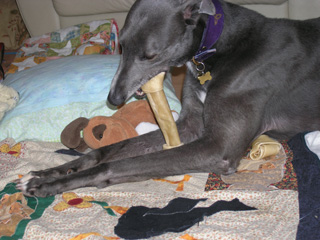 Ok finally a little bit of crafting I can show now Annie from Flower Garden has received her. This is Daffodil the tool tidy. Scissors etc. go in her wings, and she is a pin cushion. The colours were inspired by the gorgeous daffodils that were in full flower when I made her, so that became her name. Annie sent me Chook an applique hen she had made in Australia, back in January, so I wanted to send her an English hen. 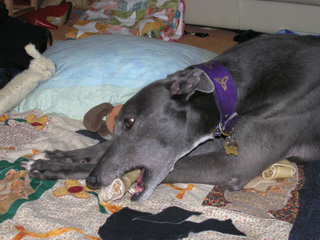 I have made other things but they are still on my camera. Having the children at home for the hols hasn’t given me a lot of computer time these past 2 weeks. Next time I’ll show you my makings. I hope you all had a very happy Easter.