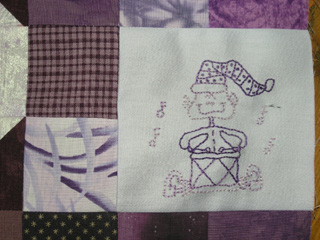 I had a lovely parcel from Rima Staines- it’s the Autumn Crow to go with the Winter Crow she created last year for me. She is a very talented artist with an Etsy shop of wonders to delight the eye and blog currently telling of her adventures in a traveling home and the reactions of the people she comes across.

Isn’t it gorgeous! Slowly slowly I am getting crows into my craft room. 🙂 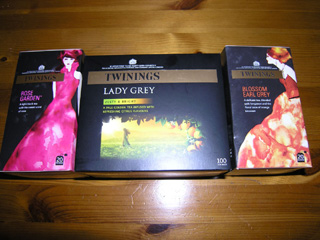 Remember me showing you this hand dyed wool (amongst others) that I bought at Ludlow Castle before Christmas? 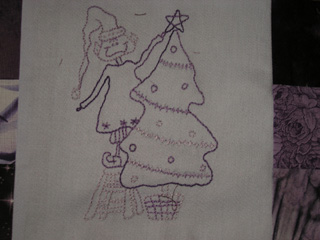 It has finally become a pair of socks for me. The pattern is a heavily modified 1930s pattern which I call my Twit Proof Socks Pattern. 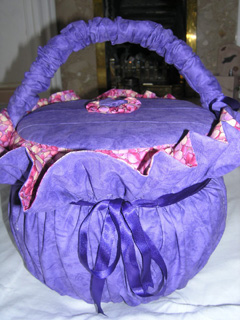 This one has been in my head even longer. The Christmas before last I made quite a few and ran out of point pots before I could make myself one. Here are links to past ones in all different colours:
here, here, here, here here there is a red one too but I can’t see a pic of it. 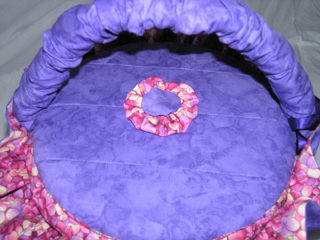 Because this pot was so big I ended up patchworking the lid. 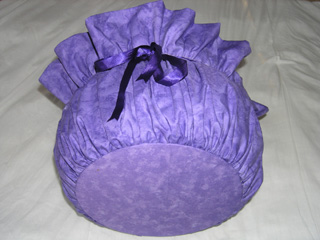 And putting a different fabric on the base which was the same shade. 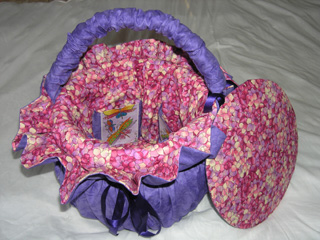 I used the base fabric for the pockets and trimmed them in Laurel Burch’s dragonfly fabric. 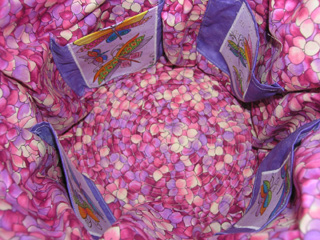 The base is quilyed in a spiral. I may get the hang of machine quilting yet. 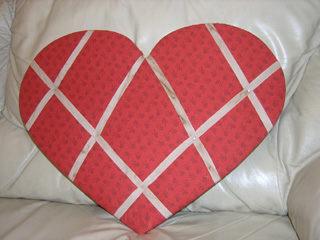 The lovely ladies at Patched Pumpkin prepared this notice board for me as I couldn’t come to class. 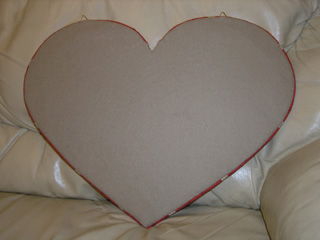 All I needed to do is sew the felt to the back and nail a couple of brass hooks. Perfect!

Even daughter’s crisp was feeling romantic as I sewed. The Valentine WreathI made last year is here 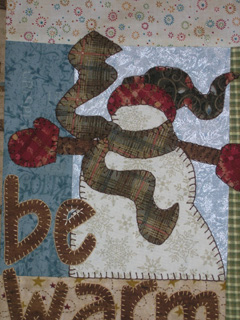 These 2 blocks are now stitched except for button eyes. I want to hurry up and finish this quilt, then get on with the Black and White Challenge Quilt- see side bar. 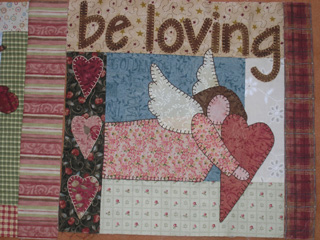 This is a chair I made-over. It’s the most comfortable one in the house. Like the teapot Stephanie? Anyone else all ready to post their Secret Time For Tea Swap parcel organised by her? 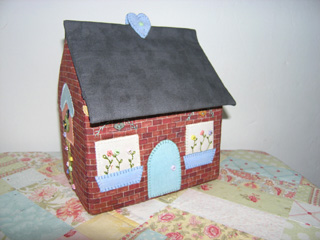 Angel’s 10th birthday cake. She came to us as a rescue who needed a lot of help. She had lived on her wits for over a year on the Welsh mountains even in knee deep snow one Winter. There was an injury to her back leg which is probably the reason why this Irish Greyhound was dumped in the middle of nowhere. It is a common problem for rescues to look after imported Irish Racing Greyhounds after their owners don’t want to race them anymore. Angel started following an elderly lady as she visited her husband’s grave daily. Eventually the lady was able to lure her in with home made pie, and call a rescue. As Angel had a coat on her like a polar bear, it was only by her ear tatoos that they realised she was a greyhound. The greyhound rescue contacted us and asked if we could take on a special case.

We lived in an isolated farmhouse at the time. It look her a month to be able to walk around the outside of the house and stables without getting scared and digging in her heels. She had to be walked in a harness as a collar would’ve come straight over her head. We already had Fluff (the faun greyhound in the video) who suffered from separation anxiety, so we agreed thinking it would be good for her too. When the 2 met, Fluff led the way around the house while the rescue lady and I sat at the table. I then told Fluff to show her upstairs which she duly did. Angel gradually grew to trust me 1st- even clearing a 5ft stable door to see where I had gone when I had left her with daughter and Fluff in a loose box. She later trusted the rest of the family.

When we moved to this busy town, she took the change well as she was settled. Unfortunately, shortly after she came 2nd overall in a fun dog show(like I said she came on in leaps and bounds), she disappeared from the garden. We looked everywhere for a week especially at night when it was quiet and postered everywhere. Doglost helped by faxing all the local vets and letting volunteer posterers and searchers know. It was the longest week of my life, not sleeping and walking and walking laying scent trails everywhere I could and postering.

We had just got in from searching a week after she had gone missing. It was 6am and the police. I had been bugging them for days about whether she had been handed in. Who ever had taken her wouldn’t have known her history and that she disliked strangers or running when she didn’t feel like it due to her leg injury, and had been spayed. The police woman said that she had the mobile number for a man who had just seen a dog matching the description and pic of Angel that he had seen in his vets. The vet was shut and he hadn’t taken our number from the poster. He waited in a lane 5 miles away for us so he could show us precisely where he’d seen this dog.

As we were still in our coats with Fluff, we went straight there. Fluff and I went into a dark wood and called Angel’s name. Slowly slowly I saw a little white face through a thicket of high stinging nettles. Hubby had gone round the other side of the wood with the man. I wasn’t sure if it was her at first glance- I tried not to stare in case it wasn’t her and the dog felt intimidated. Step by step the face came closer out of the nettles. Suddenly we both recognised one another and she leaped out making a noise I can only describe as sobbing. I haven’t heard the same sound before or since. Her sides heaved rhythmically as she sobbed and barged straight into me trying to nestle under my big wax jacket that had always been her “safe place” as she got used to scarey things before.

Afterwards she greeted Fluff. The 2 of them span round and round before I could put a lead on her. Once I had, I called hubby on a mobile phone and told him the wonderful news. He and the man were so pleased. It turned out the man had tried to help with a stolen greyhound before and the hound had run away from him so that is why he phoned the police to get us. He was ecstatic to have done the right thing and to have had a happy ending so quickly.

When we got her home she slept and slept with nightmares. She was very thin and her paws were a mess. The vet said it looked like someone had tried to keep her in an old shed with wooden floors where the nails were starting to stick out. She recovered well and had a hearty appetite. I don’t know how she escaped but I am so glad she did and was seen going into that wood. I am so used to the her being family that just the other day I asked her to pass me a book. Hmmm I’m not sure what that says about me. LOL

As you can see from the video she has come on in leaps and bounds. She is quite confident and will take the “candle” dentasticks. Precious (black and white) is beside herself being tempted but not quite believing that she can have some until she is shown clearly. Fluff is happy to be waited on. I did take more video clips -they finished all the liver and garlic cake and were starting on the crumbs once they finished the dentasticks. 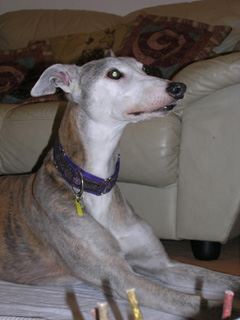 Time to wash my paws after my birthday cake and have a snooze.

Posted in Uncategorized by House Elf with 21 comments.