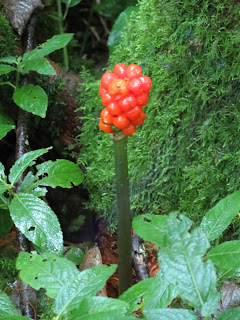 Lord and Lady plant in the grounds of The Inside Park close to Blandford Forum in Dorset. 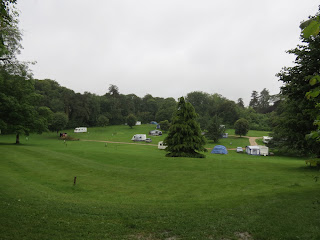 We camped in what were the grounds to a big house. 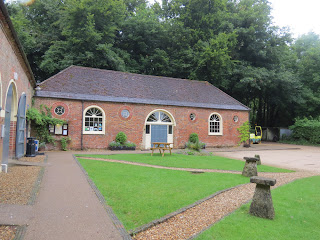 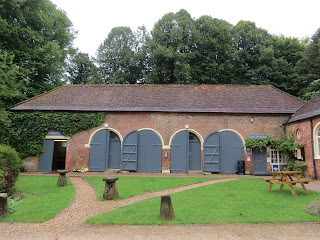 and former barn (toilets, showers, and reception)  are all that remain .
I decided to explore and then do some research when I got home. 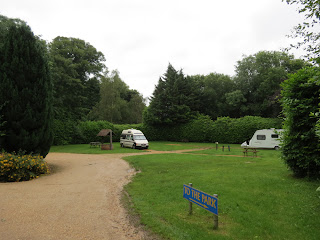 The Down House once stood here  on pitches 1-6 on this map.
Pic of the house in the 1st link. Here are some more:
A postcard of the house.
A woodcut of the house. 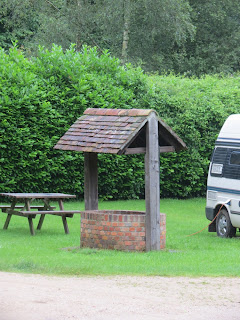 Although the well is modern, the shaft is a lot older. 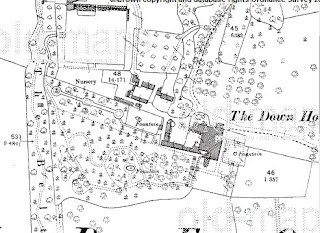 I decided to see if I could find any clues about the house which had burned down.
The 1902 map above was excellent (enlarge to read).
To get your bearings, the L shape to the left of the house (by the T of “The”) are the barn and stables. 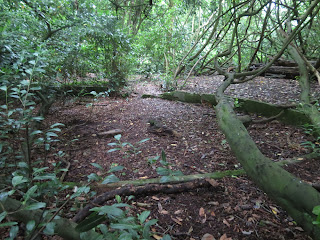 This is the woodland to the SW of the barn and stables. See the ring of stones? 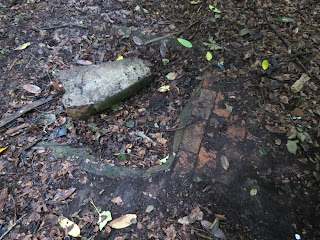 I scraped away the leaves in the centre- this is where the fountain would’ve been. 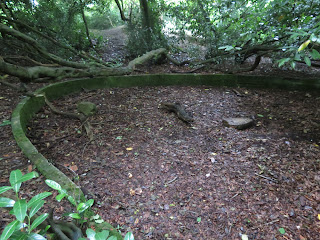 The other edge of the fountain pool. 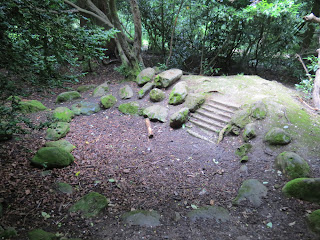 Just to the NW of it was this feature- a stepped cascade for water. 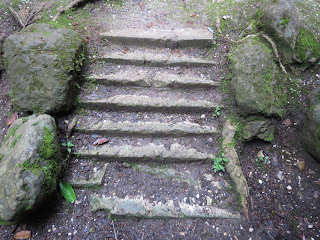 It appears as a darker blob on the map than the trees. 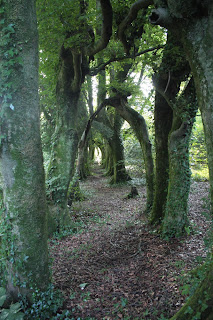 This tunnel of trees was obviously planted as a cordon for a pathway but were left to do as they pleased. 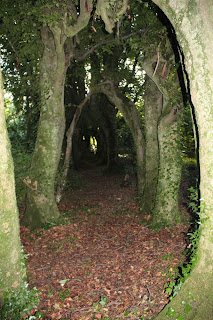 On the map they are due W of the stables below the word “Fountain”. 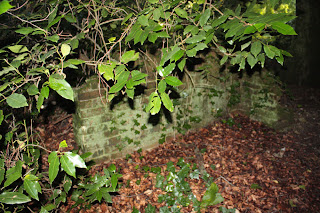 This is all that remains of the building by the “n” of fountain. 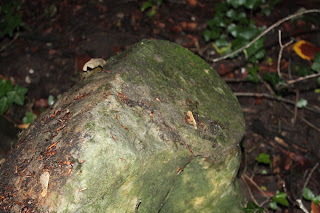 I suspect this carved stone was once a piece of ballastrade.
Now lets explore the woodland to the SE of the house. This is the area to the left on the photographs. 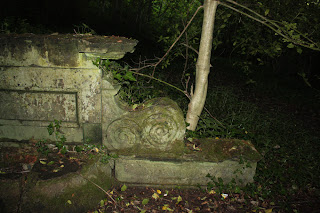 I got excited when I saw this in the gloom. 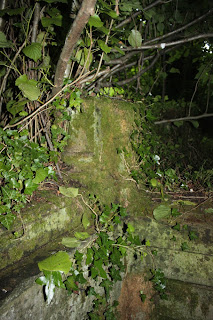 And a corner of brick and dressed stone. 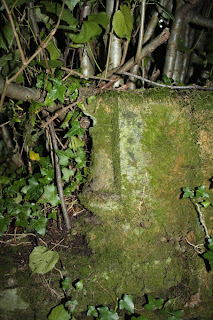 I cleared a bit of the moss so you can see the shape of the carving. 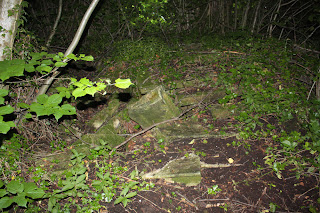 Under this ivy and built up leave mould is a staircase! 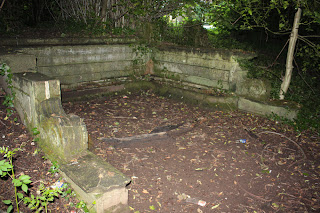 I had re-discovered a seating area straight out of Jane Austin. 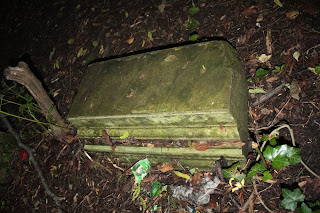 Not all stones were in place.
There was a 2nd staircase to the other side of the seating area with a modern middle section.
When you look at the photograph, this area is just out of shot on the left, but they are shown on the map as the 3 features just below the formal square of garden with the fountain in front of the house.
I was very pleased to be able to marry up what I had found with a map. What a shame about the house though. 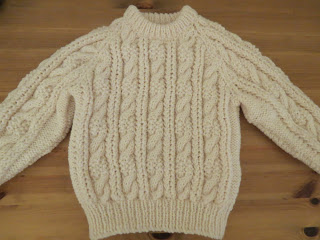 Now onto makings- the aran for my niece is finished. 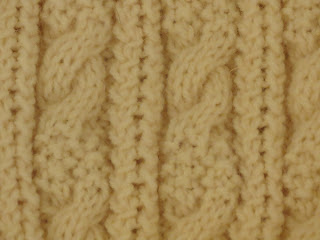 It is a simple cable with a moss stitch section pattern repeat. 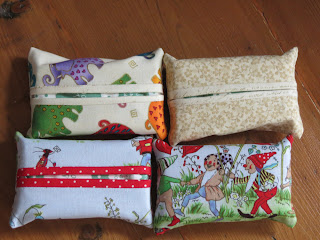 A few tissue holders for gifts. The elephant fabric is a Laurel Burch one from my drawer of strokables. I really should dip in to that drawer more often as I love Laurel Burch and Mary Engelbreit. I did make it one of my 2012 aims, so I should try harder. 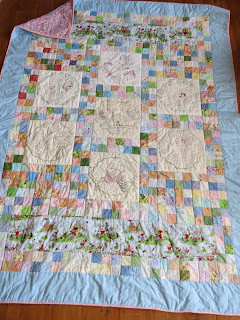 Now shhh the Fairy Quilt is finished. Sorry about the pic- it was rolled up as it is a secret present. 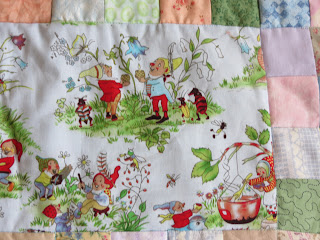 I used some elf fabric which I bought in Holland last year. 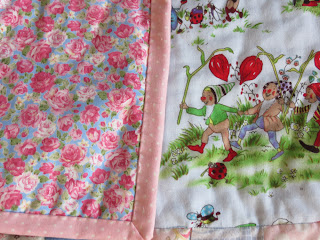 The backing is an absolutely gorgeous pink rose on mid summer blue. The binding is a pale pink dot. 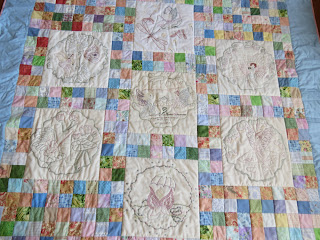 You have seen each of the stitcheries by Faeries in My Garden before. They are going  to be at the Birmingham Festival of Quilts at the weekend. I will certainly have a good rummage on that stall. Anyone got any other recommendations for the stalls? Hopefully I will be meeting Grethe while I am there.

Posted in Uncategorized by House Elf with 11 comments.