I’ve been blanket stitching the tongues. Today the red boarding fabric arrived so I’ll be making the Winter Cottage to go with the set.

I am definately a lot slower crafting without a real craft space to sprawl in. The good news is that the sanding off the old layers of varnish and lino glue is nearly over for my future craft room floor. We can start to fill the gaps between the boards once daughter has had her sleepover for her 16th birthday at the weekend. Then a light sand, a clean up, a couple of coats of varnish and then I’m in!

Lets relax for a bit while there is some sunshine and then we’ll finish off Halsall Church.

Looking up in the nave you see this. 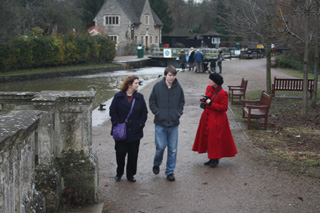 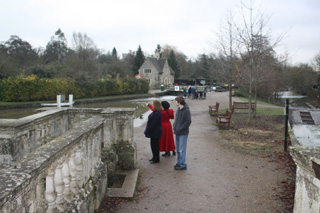 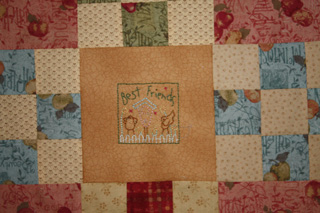 This is the very high window you can see in the outdoor photograph. It was put in in the C16th to light the rood loft which is no longer there. 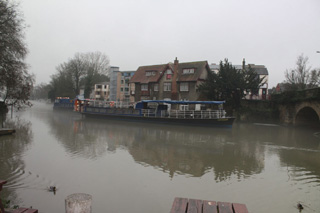 This scripture has been painted underneath it possibly in the C18th. 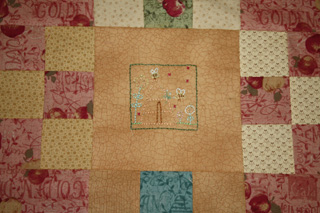 Now for the aisle itself dedicated to St Nicholas of Myra who was the patron saint of sailors. I was speaking to one of the people in the church who said that although Halsall is 3-4 miles inland as the crow flies these days, back in the C14th this was a port by high tide! This could explain the outdoor sculpture of the praying man in a boat I pictured in an earlier post. Tradition says that a lamp was put in the spire to help sailors. 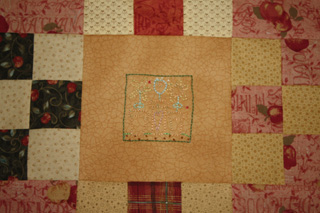 This very narrow doorway leads to the turret you can see on the outside. This is how people got up into the rood loft. The turret stairs make it so the window isn’t centrally positioned but off to the right and the stone moulding is nearly blocked by the wooden roof beams. I wished they had made the aisle wider. LOL

It could be that as the chancel is earlier than this part and work was halted around 1350 (possibly because of the Plague (Black Death) desimating Europe, that the original intention wasn’t carried out. Work had only got as far as this corner if you look at the plan I posted earlier.

The angels appear to be the original C14th but the main window is from 1990. The reds at the top were re-used from the fragmentory window pictured below.

The photo below is the window which the plaque is refering to, reusing what fragments of medieval glass that could be found. Beautiful rich colours. 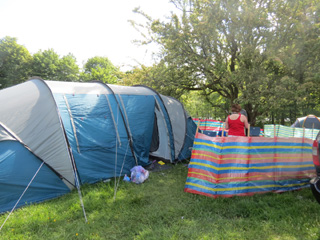 View of the South aisle from the nave. 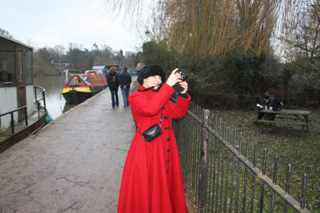 Ok now we go back outside.

The window behind the St Nicholas altar from the outside.

We’re now quickly whizzing round to the North side of the church.

I liked these 2 very different crosses forming a visual “pathway” to the church.

You can see the north turret clearly in the centre of this picture. 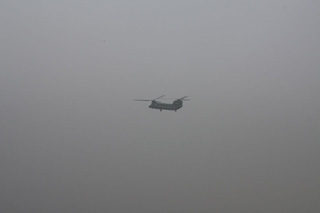 And a North facing angel. For some reason I want to say St Michael. Was he associated with the North in particular? Maybe I’m just thinking of “St Michael at the Northgate” back home in Oxford? It’s late Anglo Saxon tower with the typical double arched window. William Morris got married there.

Anyway my other excuse of being round this side of the church is to drag hubby off into the woods. Nooo none of that- to the ruins! If you remember he hadn’t come with me when I dashed off last time and I only stopped to take a few pics as he didn’t know where I’d gone. 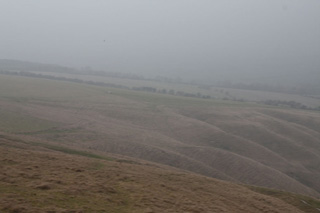 No I’m not cracking, dancing a gig in the woods (you could get a reputation round here doing that sort of thing! LOL ) I’m bouncing the damp ground feeling for foundations. There are some foundations with a couple of courses of stone outside the fenced in nettle area, so I’m trying to get an idea of size and layout. I didn’t realise hubby was taking pics. 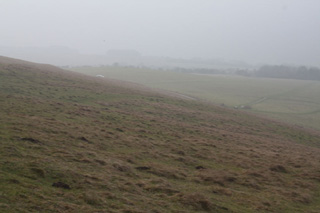 Here I am again scratching my head at a weird bit of masonry above the doorway. I took loads of pics and even uncovered the top of a doorway fallen onto the ground. I’m wondering if this might have been some sort of lodging place for visitors to the area owned and run by the church. If so, it’s possible that it could’ve been used to look after victims of the Plague as it is on the opposite side of the church to the village. Pure conjecture though. I got a bit grubby and found modern glass and pottery no older than Victorian.

This is Halsall Hall where the lords of the Manor lived. It is now divided into smaller houses. We went past here to get to Halsall School.

Ladies were serving tea and cakes in the the school hall on Harvest Festival Day so we tucked in. My hands felt so mucky! 🙂

The tables had beautiful arrangements.

The school was officially opened in 1904. The rector was a Blundell and the local bigwig was a Blundell, so it looks like the Halsalls had declined since their opening of the school onto the church in 1593.

As you can see from these 3 doorways it was usual for the boys and girls to be lined up separately in the yard and marched in for the older classes.

The infants however were mixed. I think this was usual for the time as East Oxford Middle School by the Oxpens had similar segregation above it’s doors.

Free range hens on the Moss. See how much lower the dark field is below the track. The road I’m on is a similar height to the track. Some of the height difference must be down to modern deep ploughing, and some must be from when the road had to be higher than the undrained bog marsh area.

The whole segragation thing and racism has been on my mind since the weekend. This is a rant so beware.

My daughter and a friend were escorting some Chinese school girls to their hotel from the British Musical Fireworks display. These 3 girls weren’t able to find host families to stay with. Normally I would’ve said yes but the house is a hovel and a lot of my stuff is perched in the hallway and all round the house until we have the big room properly back. These girls were then called all sorts of racist names based on their appearance by a man who had been drinking! My daughter was so ashamed. The Chinese girls were so well mannered and ignored it totally. I felt so sorry for them. One girl rushed upstairs to her room and came down with a beautiful silk hanky embroidered with pandas in a lovely box and gave it to daughter as a thank you. Like I said these are nice polite girls.

When I heard, I actually went out to the real shops and made up a gift bag for each of these 3 girls. Daughter was able to give them when she collected them from their hotel for a meal out. I wanted them to have at least some positive memory of the area and not to think that everyone was like that around here which is why they didn’t have a host family. There are times when I am so ashamed of this country and it feels so unpatriotic and awful to think it. Just what kind of a nation are we turning into when a grown man can racially abuse a group of girls walking together? Hubby gave them all a lift back to the hotel at the end of their meal. I didn’t want to risk them having it happen another time.

Ok rant over. I’ve got plans for a felt wreath at the weekend at Patched Pumpkin, and I keep looking at a soft sculpture pattern from Motherlode Toad for a pumpkin with crows. In the meantime the house needs fumigating in preparation for the influx of girls at the weekend.

If anyone wants me I’ll be hiding in the shed with a thermos of coffee. LOL


Posted in Uncategorized by House Elf with 10 comments.